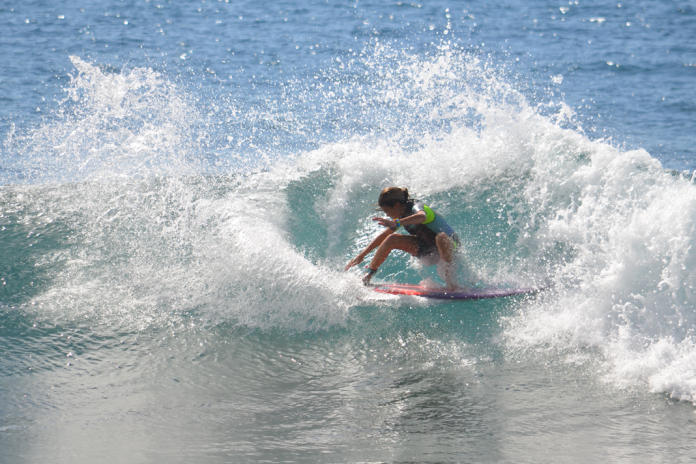 “Guess who might be going to Tahiti?” My dad had just gotten off the phone with Coach Chris so though I speculated that it might be me, I kept a straight face and said “who?” “Umm, pretty sure it’s you and Carissa Moore,” my dad responded. I was confused. I certainly wasn’t expect-ing to be invited on a surf trip with a three time world champion. And even though any other kid would be jumping for joy, (OK, I was also jumping for joy!) I was nervous because I had just finished recovering from eye surgery. I had gotten pterygiums cut out from both of my eyes and I had been out of the water for six weeks. But, now, none of that seemed to matter. I couldn’t believe I was given an opportunity of a lifetime!

My excitement was tempered a bit when we landed in Tahiti. It was raining hard and the storm wasn’t due to let up for the next three days. It wasn’t how I imagined my trip would begin, but I still had a great time adventuring. I was told ahead of time that we’d be spending the first few days waiting for the swell to arrive, still, I wanted to surf! Coach Chris and Carissa had told me before the trip to keep my expectations in check; surf trips aren’t always what you expect them to be.

A few days later, we boarded a small plane and flew to a remote atoll about a hundred miles from the main island of Tahiti. After landing, we transferred to a small boat and rode to a tiny island where we would be staying. After settling in, we hopped back on the boat and were off to a remote reef pass where we’d be surfing. We jumped off the boat, walked through a little dry coral rock path, jumped into the channel and paddled off to the wave. I couldn’t believe it, I was going to surf a long peeling right with with only a few lo-cal surfers out. Surprisingly, each Tahitian surfer paddled up to us with the nicest attitude and welcomed us with a smile and a wish for good waves.

I was hoping that my first wave would be a dream wave, but it was a wipeout. I went straight over the falls! It was frustrating to be on an amazing surf trip and then realize that I wan’t prepared the way that I would have wanted, but luckily Coach Chris was out there to help me. He gave me a few tips and after fixing my take off by taking a few more paddles, I began get-ting into a rhythm. I was frothing on how amazing the waves were!

The next day we woke up before dawn so that we could be the first ones out and not have to deal with yesterday’s “crazy” crowd of three people. The boat rides were always fun because the bumpy ride also served as a great wake up mechanism. Today, as we neared the break the waves looked big and choppy. Five minutes into all of us getting washed around on the inside we decided to go back to our island and wait for the conditions to improve. The conditions ended up staying windy and rainy, so we took the free day to rest up for the forecasted non-stop surfing we’d be facing the next two days. I got to explore the island, which wasn’t large – about a 20 minute walk around. Our hut was like a grown-up version of a treehouse and literally three steps away from the beach. Definitely a place I won’t forget.

When we got to the break the next morning the waves were way over head! It was the biggest day so far but the crowd was again light. The wind was perfect and the waves were just peeling down the reef. Unfortunately, today was the day I prob-ably struggled the most. Most of my session was filled with poundings and getting washed around inside, but I was able to push though and find some gems. I caught a wave that just lined up perfectly, and with that rush of joy, I literally could not stop smiling after my ride ended! I may have not done amazing maneuvers, but the way it felt to get such a perfect wave, is one of the happiest feelings in the world. We stayed out for four hours, by the time we got back to our little island I was just dying to eat pancakes!

The second session in the afternoon, was again challenging. The waves were pumping but slowing down a bit. Again, most of my session involved either a wipe-out or being in the wrong position on the wave. After an hour of only catching one wave with turns, I felt pretty frustrated and I struggled to surf well for the rest of the session. But from this session I realized Carissa was struggling as well. I was surprised that professionals also have rough sessions, but to improve, its important to keep push-ing my turns and keep trying. I could’t wait to just press restart and reset myself for the last day on the island.

On the our last day of the trip we again woke up early to try and be the first ones out. The waves were smaller today but perfect. I had my usual warm up waves in the beginning, but then I was able to finally get in tune and I felt liked I surfed my best session of the trip. Two hours into the session the crowd thinned out and I was able to get one good wave after another. The waves were so fun that we stayed out for four hours and probably would have stayed longer if it wasn’t for the fact that I was again craving pancakes, extremely sunburnt, and had to catch a plane home. It was definitely a plus to be able to end the trip with a solid session that I was happy with. It felt great to end the trip on a good note.

I learned so much from this trip. From watching Carissa, I realized how much she puts into her surfing. She works really hard to not only learn new moves but to improve the ones she’s already familiar with. I also learned that on surf trips its good to keep your expectations at an even standard because if you expect too much, it could be disappointing. I couldn’t be disappointed because, well, it was a surf trip to Tahiti with Carissa Moore! Who would complain about that?! Watching her allowed me to learn a lot about free surfs too, and how a lot of the time, professionals do fall, but that falling is part of an important process if you want to be able to improve. I am more motivated than ever to go home and really excel and expand my surfing.