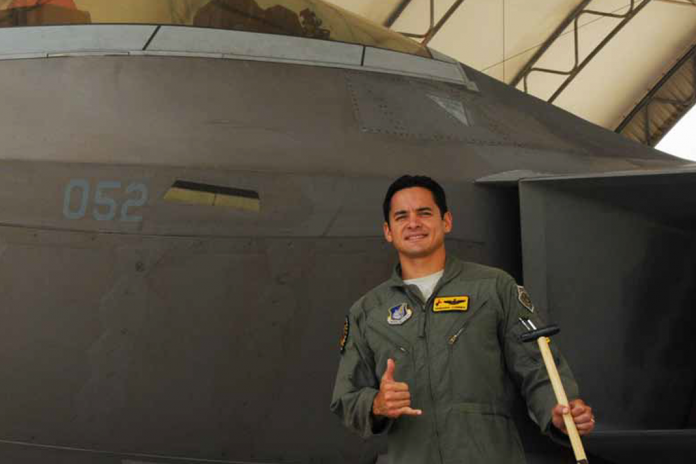 Whether he is flying at the speed of sound, or paddling across the deep blue sea, you would never know what he does for a living. That’s because, if you don’t specifically ask him, he won’t volunteer the information. He is reserved and understated, but not shy, tall and handsome, and carries himself proudly. One would guess that he is a doctor, lawyer or perhaps some other professional. He comes from a fine lineage of paddlers, as his dad was legendary in the canoe paddling world, and he continues to make his mark in the water.

When asked what he does for a living, he replied, “I’m in the Air Force,” and did not elaborate further. My reaction and response at the time was, “Cool!” Later, I learned that he was a captain and a pilot. I further discovered that he flies F-22 Raptors in the United States Air Force, has achieved the office of Major, and that he serves to protect us in Hawaii from enemies that roam the earth!

Vaimana Ikaika Conner grew up in Kailua, with mom Lesline Vainer Conner, and his late dad and ocean waterman legend, Thomas “Tommy” Conner. Despite both parents being avid paddlers, he remarked, “They never pushed us to paddle, and they left it up to us to decide. I’ve enjoyed competitive sports played growing up through Kailua High School, but really didn’t start paddling competitively until after high school.” Conner’s first paddling experience was with Kailua Canoe Club, in the Boys 18 division.

“My coach, Derek Lee Loy had just come over from Keahiakahoe to coach, and he brought over all his 18 boys crew, who had been paddling together for years. I was the new one and fit in pretty well, along with friend Zion Thompson (Guitarist in the Green Band). For us, it was an awesome season with a lot of first place finishes, and I was hooked after that.”

After high school, Conner decided to pursue a higher education, attending the University of Hawaii. He was offered a scholarship from the Air Force, and he decided that it would be fun to travel.

“I remember grow-ing up, how it was awesome, as a kid, watching my dad win the Molokai Hoe…”

“When I decided I was going to join the Air Force after college, I thought flying was the logical option in a flying force.” “I remember growing up, how it was awe-some, as a kid, watching my dad win the Molokai Hoe, but the biggest impression he left on me was later, when I started paddling, and he spent more time as a coach. Following in his footsteps, I live my life constantly striving to make an impact; either on people’s lives, or for the betterment of any organization I am a part of. I credit my dad for that inspiration, because I saw how much of an impact he made on the paddlers that he coached. 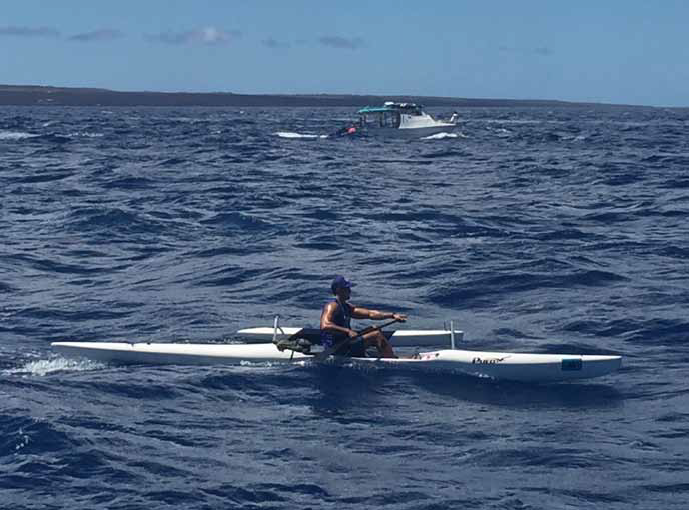 ” When asked if there were any similarities between flying a jet and flying in a canoe, Vaimana remarked, “Not many technical, but two major similarities are competition and teamwork. As a sport, canoe paddling is very competitive and so is flying fighters. From the moment you start flying in the Air Force, it is a constant competition, and you are evaluated at every level to perform and get better. At the same time, teamwork is as critical as it is in paddling.” He added, “Although you are the only person in the plane, you always train or go to combat with at least one other plane with you. Like paddling a six-man canoe, you must be a cohesive force operating on the same game plan and tempo, in order to have success. The roles and responsibilities of each member of the team are clearly defined and must be executed flawlessly to ensure that objectives are met.”

“The challenges are endless and the satisfaction is limitless!”

In describing the experience of 4G’s, Connor explained, “4G’s is like a high performance roller coaster. 9G’s is what the F-22 is capable of, and that feel-ing is intense. You have to strain every muscle in your lower body to prevent yourself from passing out, so it can be fatiguing for long periods of time. You are usually only doing this to deny another plane from shooting you, or trying to shoot down another plane, so you are mentally focused on that task. The fatigue doesn’t set in until after the engagement. The F-22 only goes about Mach 2.5 and when you are up high, you don’t really feel anything different. It’s only when you can see your speed in relation to something nearby, like another airplane or something on the ground. Flying fast through canyons in Alaska has been a blast!”

Connor was asked whether he would recommend his job to the kids deciding what to do in life. He responded, “Absolutely! I’ve never encountered a group of people that have as much passion for their job as the people I work with on a daily basis. The challenges are endless and the satisfaction is limitless!”

When he was asked how one would get started on this career path, Connor replied, “You have to be an officer to fly in the Air Force, and you have to get a college degree to be an officer; so the first step is to go to school and get your degree. There are lots of different ways to get this accomplished.”

Upon being asked whether he gets to bomb/blow-up anything in the course of his duties, he replied, “Every once in a while!” He has served on several tours, during deployments to southwest and southeast Asia. When he was asked whether he has had opportunities to shoot down any enemies, Connor responded, “No, because the US hasn’t had a formidable air threat in decades.”

Connor was asked about the longevity of a career flying fighter planes, and he explained, “As long as your body can keep up with G’s, you can stay in a job that allows you to fly. There are few people over 50 and I can’t think of any over 60 who can sustain this.”

When asked about his plans for and after retirement, he remarked, “I could retire when I am 42, but I’ll continue to work after that. Either retire and start another career, or keep going past that in the Air Force. As I’ve said before, I live for making an impact; mostly in people lives. I’ve coached young kids in many different sports, and I can see myself doing that for a long time after I stop working.”

So, readers, the next time you hear the roaring jet engines of an F-22 Raptor streaking into the wild blue yonder, just consider that it could be Vaimana
(also known as “Tiki”), in the cockpit!