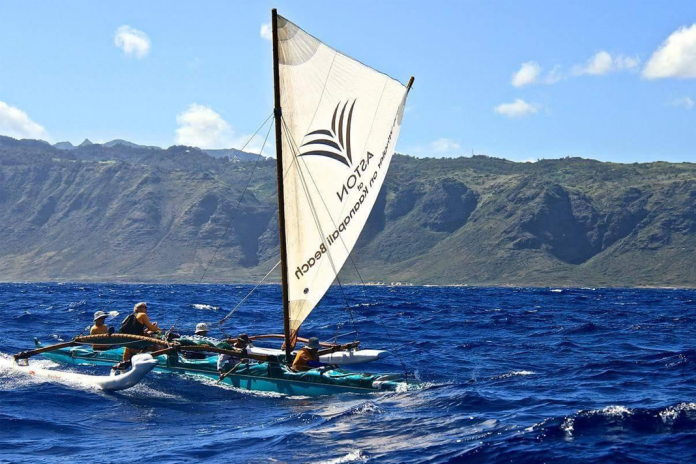 When most people think ahead to what they will be doing when turning age 70, it’s typically activities like golf, gardening, pottery, playing cards… but not for Mike Kincaid. This year, as “Uncle Mike” turns 70, he is still steering his sailing canoe across the rough Hawaiian ocean channels, racing the other crews and enjoying the heck out it.

Mike’s long involvement in Hawaiian sailing canoes stared with the first Na Holo Kai race in 1987, when a resurgence of interest in of Hawaiian culture culminated in the Governor declaring that year as Ho’olako, “the Year of the Hawaiian.” Each county was requested to create an event celebrating the Hawaiian culture, and the county of Kauai decided to hold a sailing canoe race from Oahu to Kauai.

Mike was born to mixed-culture parents; his mainland-born father met his Niihau-born mother when both were working in Pearl Harbor. At that time, Western values were being embraced and the Hawaiian culture was suppressed, so even though Mike went to Kamehameha Schools for high school, there was no focus on his Hawaiian heritage. By 1987, Mike’s parents had both recently passed away, and he was suddenly in a flux and found a desire to connect with his Hawaiian ancestry. The invitation to participate in this race gave him a chance to embrace the significant Hawaiian values of humility, self-esteem, self-confidence, and adventure. There had been no major organization of people crossing the Kaieiewaho channel since 1800, when the troops of Kamehameha attempted to cross to conquer the island of Kauai, and were turned back by stormy weather. Mike knew that at the time of that attempted crossing long ago, it was so commonplace for people to use a canoe for transportation, for sport, for fishing, that even children felt confident in the canoe, and he felt it important to be able to relate to this confidence.

Mike had some sailing experience, and had even lived with his girlfriend (and now wife) Patty on his Coronado 34 sailboat. As a Marine helicopter pilot, he also had the opportunity to cross the Hawaiian ocean channels from above. He and his friends together owned a canoe and had the skills to build the equipment necessary to turn it into a sail-ing canoe and practice in Kailua bay. So they put together a crew, and with excitement and maybe a bit of anxiety, prepared for the race day.

The Na Holo Kai race organizers gave each crew a sail and they had to find the rest of equipment themselves. Nine canoes were entered, 6 from Oahu and 3 from Kauai. Canoe captains included Buffalo Kealana, Kenny Olds, Mike Muller, Nappy Napoleon, Paul Gaye, Nick Beck, and Sully Potts. The race was organized by Teddy Blake, Warren Perry, and Carlos Andrade, who was involved with the Hokulea, which had just returned from a two-year voyage.

The race start was at Pokai Bay and finish at Nawiliwili Harbor on Kauai. The race started around 4:00am; the full moon was setting, and Mike’s brother Jimmy said that looking at the moon-lit outline of the ancient shape of the sails was “chicken skin.” As they sailed the moon was setting and sun was rising, lighting their way out to Kaena point and into the Kaieiewaho channel. The crossing took about 10 hours for most canoes, and though it was won by Nick Beck’s crew from Kauai, like many of the race participants, Mike was hooked.

After the first Na Holo Kai race, there were sporadic coastal sailing canoe races organized. Mike Kincaid and Warren Perry organized the Hawaiian Sailing Canoe Association (HSCA) and sailed un-der that name at the various races. Eventually they used the HSCA to organize and run a race series, and Mike became the first president of the HSCA.

In 1994, Mike and Nappy Napoleon decided to sail from the Big Island to Maui, again maybe the first time this had been done in a sailing canoe vessel since ancient times. Mike’s crew included Manny Vincent of Kawaihae canoe club, and Nappy’s crew included his wife Anona and their son Damon. They left from Kapaa Beach on the Big Island and sailed to La Perouse Bay on Maui, without a motorboat escort. The big mountains of Maui and the Big Island funnel the weather through, creating a rough channel, often with tight period waves. Mike said that the small amas they were using at that time would hit the back of the waves and kill their hull speed, then the wind would drive them again, then they would hit the back of the waves, which created such a rough ride that they had to spill the wind out of the sail in order to not have the canoe come apart. From this Mike knew that’d to make bigger amas to give them more buoyancy. At each race they were learning something new about how to improve the equipment. Mike’s friend Tom Boomer met them on the Maui end, and after a night of listening to their stories, Tom also was hooked and became one of Mike’s long-term partners in the adventure of sailing canoes, escorting many races and excursions, and eventually racing his own canoe. They enjoyed the experiences so much that they began going on “holoholo” sailing expeditions in addition to the races, stopping and camping in hard-to-reach places on all of the islands. Brother Jimmy says “Mike loves everything about it, and turns tedious task such as rigging into a process and an art-form.”

Once they started sailing from the Big Island, Mike recognized the logistical nightmare of ship-ping, rigging, sailing, unrigging, shipping, as well the many logistical decisions beyond the canoes feeding crews, arranging escort boats, housing the paddlers – so they created an island to island race series that started on the Big Island and ended on Kauai, which is what the Hawaiian Sailing Canoe Association still follows.

Mikes’ favorite race course is Keokea to Hana… he says “its intimidating when you drive up to Keokea, knowing the challenging waters ahead, and realize that once you put the canoe in, there is no turning back.” Even after over 20 years of crossing this channel he recognizes the danger, the challenges, the potential for failure, but also that the connection to the ocean and to his culture and the beauty of that area is always worth the risk. And doesn’t sometimes the risk make it all the more beautiful?

This year the 30th consecutive Na Holo Kai race was held, and Mike said it was one of the most fun that he can remember – the wind speed and direction were optimal and pushed the canoes to Kauai and the winning crew (Maui Jim crew from Kauai) finished within a minute of the record time. He was worried about his body holding out, but knows that as long as he can physically make it, “I just gotta go.” Keep on going, Uncle Mike!!! 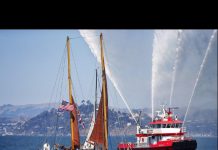 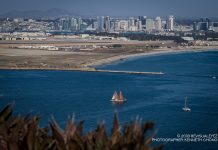