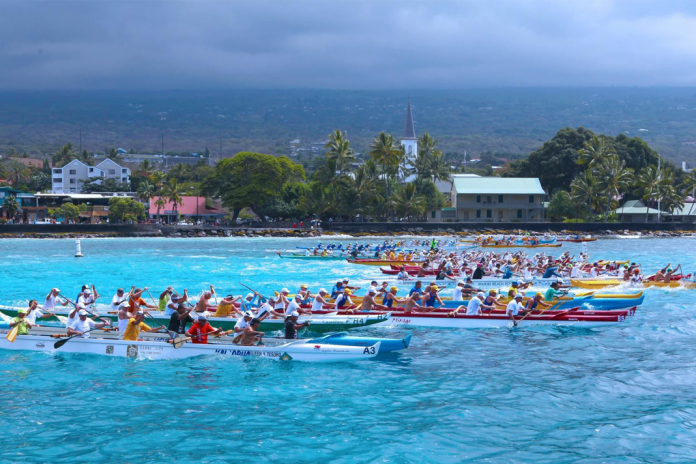 Kailua-Kona, HI (April 19, 2018) – 1973 was a year with many historic events. A signed ceasefire in the Vietnam War, Watergate hearings began, Skylab, the first American space station is launched, and here in Hawaii, Elvis Presley headlined the Aloha from Hawaii con-cert. In the sports arena, Billie Jean King and Bobby Riggs competed in “The Battle of the Sexes” exhibition tennis match and women lined up for the first time at the starting line at the Queen Lili’uokalani Long Distance Canoe Race.

A year after the inaugural 18-mile long distance outrigger canoe race started, women paddling 6-person canoes were invited to race the course. Eleven crews of women took on the challenge and raced the course starting in Kailua Bay and finishing in Honaunau Bay. The Queen’s Race salutes these pioneer-ing women and the support crews who believed in their ability to paddle an open ocean race and steered the way for other women to follow.

Last year, the Queen Lili’uokalani Long Distance Canoe Race (Queen’s Race) welcomed 117 women’s crews to its signature Saturday long distance race. The women of today are as fierce as the women of 1973. What has changed today is the evolution of canoe technology and the incredible endurance of today’s women and men paddlers. Iron crews, those racing the entire 18 miles without crew changes, have begun to dominate the scoreboard. Lighter canoes, faster times and athletes from around the world wait with excitement for their summer trip to Kona to race against the world’s best.

As the State’s Official Team Sport, outrigger canoe racing is a significant and fundamental Hawaiian cultural event in Hawaii. Kona’s place in canoe regatta his-tory is unrivaled and for nearly fifty years, the Queen Lili‘uokalani Long Distance Ca-noe Races has continued to share Hawai-ian culture through the sport of outrigger canoe racing with the world.

Kaihe’s Korner: What to do After Catching ” The Bump”