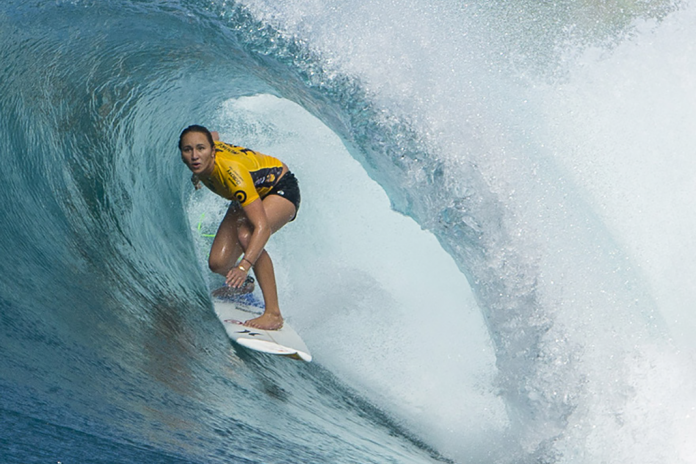 No matter whether she is in the water or on land, Hawaii’s own Carissa Moore, projects sunshine! She is the type of person that one always looks for- ward to seeing and being around. Her “positive vibe” follows this young world champion wherever she goes. As we begin our photo shoot, we witness this before our very eyes! People in cars passed by the shoot at Sandy Beach, calling out “Yea, Carissa!” or “Howzit, Carissa!” She smiled and acknowledged each of them, calling back, “Hi, everythings great!” This happens again and again. The people of Hawaii love their champion! Moore’s list of accomplishments include being the Top Female Surfer by Surfer Magazine in 2011, along with the accolade of becoming the youngest female champion in history, when she won this title at the age of eighteen. In 2012, Moore was named an Adventurer of the Year by the National Geographic Society, and Glamour Magazine named her Woman of the Year in 2013. Additionally, she was inducted into the Surfers’ Hall of Fame in 2014. This beloved young woman has represented Hawaii and the surfing world admirably!

In her younger days, she enjoyed the sport, often challenging the boys and doing very well! Three-time World Surfing Champion Carissa Moore doesn’t recall too much of the early days of competition, but clearly remembers enjoying being in the water with her dad Chris Moore. “It was sometimes a bit of a chore to get me to the beach, but once I was there, I had a blast.” She remembers surfing in those early contests, “Everyone wins a trophy and a goodie bag in the Menehune Division.” As a six-year old girl Surfing in the Menehune divisions, Moore recalls, “Dad entered me in a few (contests) at Haleiwa and Queens growing up. It was a lot of fun!”

Her dad Chris, who is a swimming champion in his own right, has been there from the beginning to the present. He has coached this champion into three world titles thus far. To keep in “tip-top condition,” Carissa trains and surfs almost every day. Additionally, she trains on-land three to four times a week, with the addition of yoga to her routine three times a week, as well.

“No better place than home in Hawaii”

When asked whether she enjoyed participating in sports other than surfing, she jokingly replied, “No, I’m lame!”
Carissa has surfed in many countries, and when asked where her favorite surf location is, she ex- claimed, “No better place than home in Hawaii!” This twenty-three year old, who graduated from Punahou School, has won World Championships in 2011, 2013 & 2015. When she was asked what it was like to win her first title versus the successive titles, she explained, “Each world title has been satisfying in its own way. To do it the first time was a dream come true. It was something I worked for my whole life.” She continued, “The second one felt like I was trying to prove that the first one wasn’t just luck, and the third one really felt like it was for myself, and surfing from my heart.”

Moore is always being inspired, as well as chal- lenged to the next level, by her peers. She explained, “Andy Irons (three time World Champion) and Kelly Slater (eleven time World Champion) are people that I’ve always looked up to. I love John John’s style and approach to a wave.”
This multi-talented young woman was also featured on musician Kevin Okimoto’s single. She performs in “Love Down On You.” Being a “Rock Star” surf- ing Champion, and with the addition of singing, Moore has rubbed elbows with some great people in the spotlight. She comments, “I’ve been very blessed to meet a lot of very cool people along this journey.” Moore added, “I was invited to the Glam- our Women of Year Awards in New York City, a few years ago, and I got to meet Nobel Peace Prize winner Malala, whose story is super-inspiring. I also got to take a picture with Lady Gaga and Barbara Streisand, which was pretty neat!”
When asked whether there were more musical albums in her future and perhaps even becoming a singing star, she said “I don’t know. I really enjoy singing, but I definitely have a fear of singing in front of people!”

Her Ohana is made up of too many to name, but presently she lives with her dad, sister, and fiancé Luke. Her mom and step-dad live a valley away and her grandparents live down the road. She added, “I’m very lucky to have them all close by.” Moore was asked what she would be doing if she weren’t a professional surfer. After thinking for a moment, she replied, “I’d probably be studying to become a teacher, helping Luke out at Banan (a health food restaurant and food truck), and doing more philanthropic work. In the near future, perhaps after Fifteen World Titles, Moore was asked what she would be doing. Being ever-humble, she laughingly replied, “I don’t know if I’ll ever get close to fifteen world titles, but I’d like to surf and compete for as long as I can, and really enjoy it!”
She continued “It really is a wonderful life, and I feel so blessed. After surfing though, I’d really love to become a mom, and find a way to give back. That is what I am really passionate about.”

“I’ve done some work with ‘Waves 4 Water,’ an organization that brings water filters to people who don’t have access to clean water. It’s super easy, and with a little effort, you can make a big difference wherever you go.”
Moore continues to be an inspiration and role- model, as well as a surfing hero to many of Hawaii’s youth. Hawaii is proud to call her one of our own!