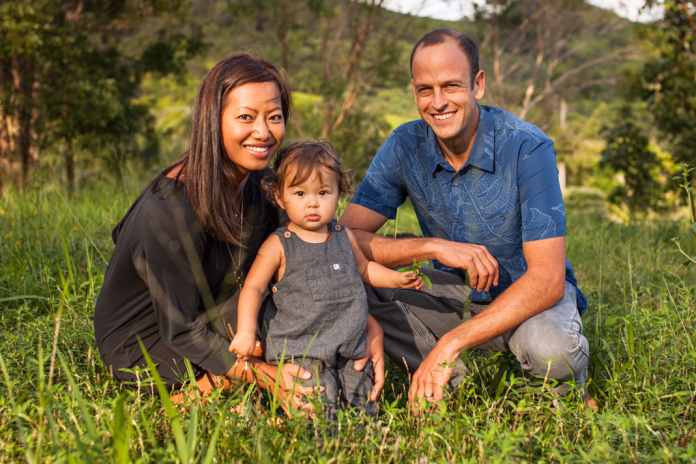 The last time you graced the cover of Makai, how old were you and has life changed for you?

I believe it was 2008– a few months after we started Kamanu Composites. I was 23 years old. At the time, I was working 50-60 hours per week in our shop building canoes and spending ten to sixteen hours per week paddling. In 2010 I was run over by a motor boat and everything changed, over-night. I came home to Kaua’i to recover, and after just a few days I emailed Keizo and Kelly to tell them that I wouldn’t be coming back to O’ahu. I’d always planned to move back home eventually, the accident just put my plans in fast forward. For the last eight years I’ve just been doing every-thing that I can do remotely for Kamanu Composites. Which is mainly finance (making sure our checks don’t bounce), human resources (making sure employees get paid on time), and customer service  (making sure every customer is happy with their experience of buying a canoe).

In that time period, I’ve gotten married (to the amazing woman who wrote about us for our last Makai cover story), had a daughter, and have another child on the way.

What would be one of the main things that has changed?

One big change is my relationship to paddling. In the few years before my accident in 2010, paddling wasn’t fun for me anywhere. I did it because I wanted to be among the best and not because I enjoyed it. At the time, we were paddling from 4:30am-7am most mornings, and then working ten hour days in the shop, and then getting home and paddling again in the dark. It fried me, both mentally and physically. I was tired all the time and I had a series of illnesses (mono and then swine flu) which took me out of competition right in the peak of the season. My accident was a wake up call for me that I needed to change my approach to paddling, and to life.

It’s taken me some time, but I’ve begun to redevelop a healthy relationship with paddling. While I’m getting on the water way less than I used to, I now look forward to it every time, and I feel GREAT after-wards. Instead of feeling worn down from being on the water all the time, I now feel worn down when I don’t get on the water a few times per week.

I was living on O’ahu when we last were on the cover of Makai– paddling for Kailua Canoe Club and racing in Kanaka Ikaika and PA’A Races. Now I live on Kaua’i, I help coach at Pu’uwai Canoe Club, I do most of my paddling out of Kapa’a and the Wailua River, and I race in the Kaua’i Hoe Wa’a series.

You are heading into an election, and running for Kauai County Council. Could you tell makai readars why you are running?

I’m running for Kaua’i County Council because I strongly believe that we can build a better future for our islands. And, in the process, we can build a better world. All of us in Hawai’i have this instict to try and turn back time to return to the quieter Hawai’i that we all remember from our childhoods. But, we know that we can’t do that, and we hear so often that nothing can be done or that the tradeoffs are too severe. And so we just keep muddling forward. Traffic gets worse, housings gets more expensive, resorts keep getting built, and more and more families are being forced to move away. And meanwhile, every day we read about the catastrophic effects of climate change including sea level rise, ocean acidification, and more intense storm events. It’s easy to throw our arms up in defeat and so often I catch myself doing exactly that. How can we, this little island in the middle of the pacific, fix all of these issues that are driven by global events? But, I look at my 20 month old daughter and she gives me hope. I don’t think that it’s inevitable that we’ll solve all of these issues but I do think it’s possible. And just by imagining the possibilities, I am inspired to at least try my hardest.

What are the positive experiences you’ve had while running?

I really enjoy meeting new people, learning about the issues that they are facing, and also learning more and more about the challenges facing our county government.

You being a elite waterperson has that helped you with your decision to “throw your hat into the ring”?

Spending so much time on the water has helped me in three profound ways. One, by spending so much of my life racing, I’ve learned that it’s OK not to always win. I think that not being afraid to lose allows me to be much more free to do and say exactly what I believe in. Two, paddletics is really a thing. Growing up in and around canoe clubs and then spending a decade in the boat building industry has given me a healthy respect for the fact that we don’t always make entirely rational decisions and it’s important to address and respect peoples emotions. Lastly, my entire political philosophy is based on my experience as a steersmen and paddling rudderless canoes. To make forward progress, you have to balance out each side. Paddle continuously on one side, and you’ll go in circles. But, sometimes you’ll get a strong wind across your bow, and you’ll be forced to stay on one side for awhile. The point is that an effective steersmen is working both with the paddlers in the canoe and the continuously changing environment to get the canoe moving as fast as possible in a forward direction.

What has stayed the same since the last time makai wrote about you?

Keizo and Kelly are still two of my closest friends. I still paddle a Pueo.

Are you still competing in races, Regatta and or distance or OC1?

“I wouldn’t call it “competing” any more. I do still race in all events, but I do it more for fun than for the competition.”

Including the year I got run over (though I never actually touched the canoe that year), I’ve raced the Moloka’i Hoe 13 times.

Have you participated in any new sport, activities or hobbies that keep you focused or driven?

Ever since my daughter was born, I’ve tried to take a long walk or hike with her at least five times per week. Because I can do it with her, I spend more time walking than I do paddling now.

What kinda of things in your own would you like to see changed in our communities which would be in your opinion and that you could possibly have a hand is changing or keeping?

The County Council is the land use body for Kaua’i. From the cost of housing, to traffic, to inequality, to climate change- our land and how we use it is at the heart of all these issues. And while the county council may be limited in some aspects of island governance, we do have the power to direct the density, location, and form of development. I think that the most important thing for our communities is to direct all of our future growth into our towns. To decrease the cost of housing, we need to make it easier to build, but we can’t do that at the expense of our open space and agricultural land. By increasing the density and livability of our town cores, we can not only reduce the cost of housing, but we will also reduce the amount of time that we all spend in traffic and we can break our reliance on cars, which is the single biggest impact we can make on reducing our carbon emissions.

Okay, last political question, what makes you the best candidate, and why?

I think it’s important to clarify that I am not the solution here. Alone, I can’t do anything. All legislation needs four votes to pass through the council, and for that to happen we need active community engagement on our core issues. Maybe this is because I’m not a real politician but I’ll never say I’m the best candidate. I’m just one person trying my hardest to make our community a better place.

Okay back to your personal life! Back when, that’s what we will call it as it was over 10 years ago we last interviewed you- so back when you were single, and now you are married, how many keiki do you have? Since we are hoping that you get elected into office, what kind of job do you do besides representing your community?

I have one amazing 20 month old daughter, and one more child that is due to arrive on the day of the general election. I still manage finance, customer service, and human resources for Kamanu Composites. I’m also the treasurer of Malama Huleia a non profit dedicate to removing mangrove on the Huleia river where I grew up paddling. I served on the Citizens Advisory Commit-tee for the General Plan update for Kaua’i. I spend my nights and weekends pursuing a Masters in Public Administration with a focus in public policy. And I do a fair amount of paddling coaching, from club paddling, to one on one, to group clinics. There’s a lot written at LukeEvslin.com if you need more info. And please don’t hesitate to ask any followup questions.