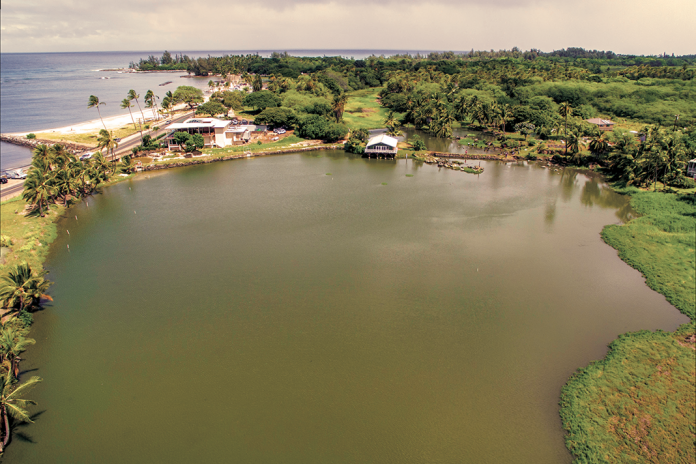 Take a few steps past the big wooden country doors onto the sparsely grassed path and your feet canʻt help but slow you down. Your attention has been captivated, and every thought you held before arriving at her gates has vanished. Now, at a complete stop, your mind, but mostly heart, is just trying to take it all in. The fish… you can see them swimming. The water is shimmering, reflecting, still and mysterious. The coconut trees are here and just effortless. Their long arms extend gracefully to tickle the water’s surface. Ducks float and flip by peacefully as you breathe and pan the view in front of you.

You are standing at the knees of a 400-year- old Hawaiian fishpond, a loko iʻa.

Loko iʻa systems are impressive structures. They represent one of the world’s most significant and successful aquaculture achievements. Reflecting the art of Native Hawaiian resource management practices, this system is self-sustaining and can maintain fish stocks if properly managed.

You continue to pan. You see an old hale atop a small grassy hill. In the background, Oʻahu’s highest peak, Mauna Kaʻala, casts a vivid reflection in the calm pond waters. As you pass over the old concrete mākāhā (gates) lined with hazard cones and rusted metal you peer down. Beneath an old Milo tree, the pond flows gently to the sea. 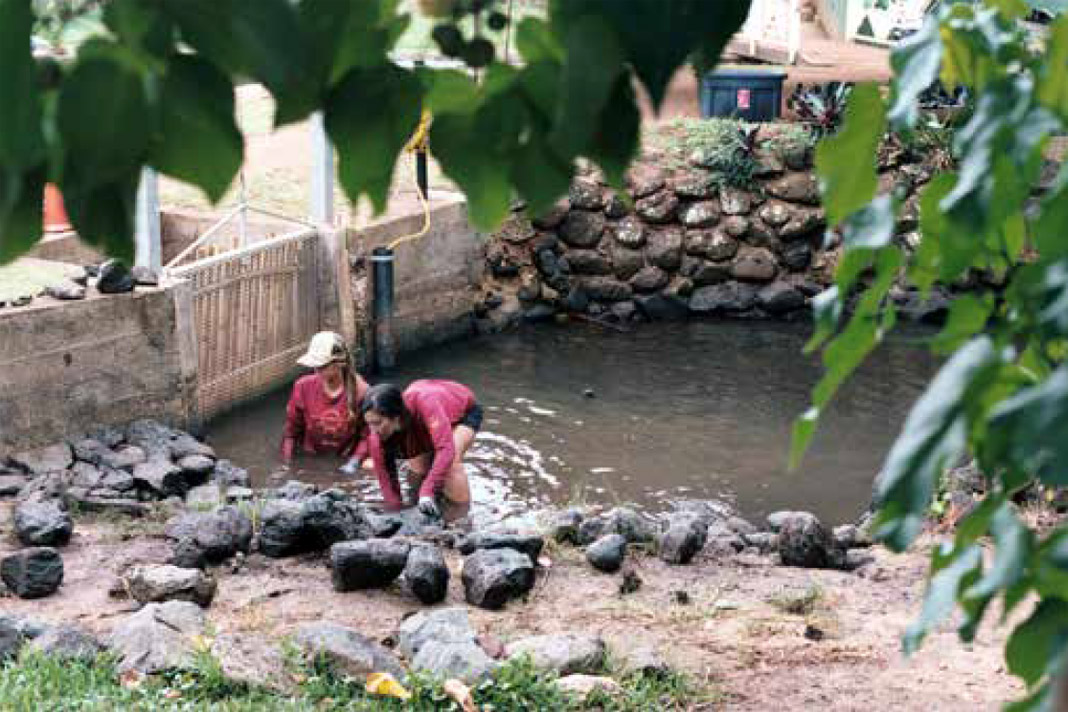 This is Loko ea. Ea can be defined as life, air, breath, independence, to smell, and not the least of which, the action of rising. Translations of Loko ea include the rising pond, the independent pond, the pond providing breath, air and ultimately life. This area is traditionally known for its profusion of fresh water springs and flowing streams, which make up the bulk of Loko ea. Famous was the moku of Waialua for its abundance and fertility where mahiʻai, farmers, and kanaka lawaiʻa, fishermen could sustain their families with bountiful harvests.

Today, Loko ea is still an ancestral place of importance, a significant Wahi Pana to the people of Waialua. The site is associated with ancient deities, cultural practices and historical events. This fishpond once helped to sustain its community by providing aquatic food resources like native fish and seaweed; naturally, sustainably, independently. Over time, Loko ea has unfortunately taken on an unprecedented amount of stress due to surrounding developments, mismanagement of resources and lack of continuous cultural practices, and has been out of operation for approximately 50 years.

In 1901, J.H. Cobb estimated that about 360 fishponds were once in operation in Hawaiʻi. While the remains of many of those fishponds have been lost, many of those left today can be restored as productive food systems for surrounding communities, including Loko ea. Newly restored loko iʻa such as Loko ea can provide employment, economic opportunity, fish stock and near shore fishery enhancement, educational opportunities and most importantly promote the sharing of Hawaiian cultural values. 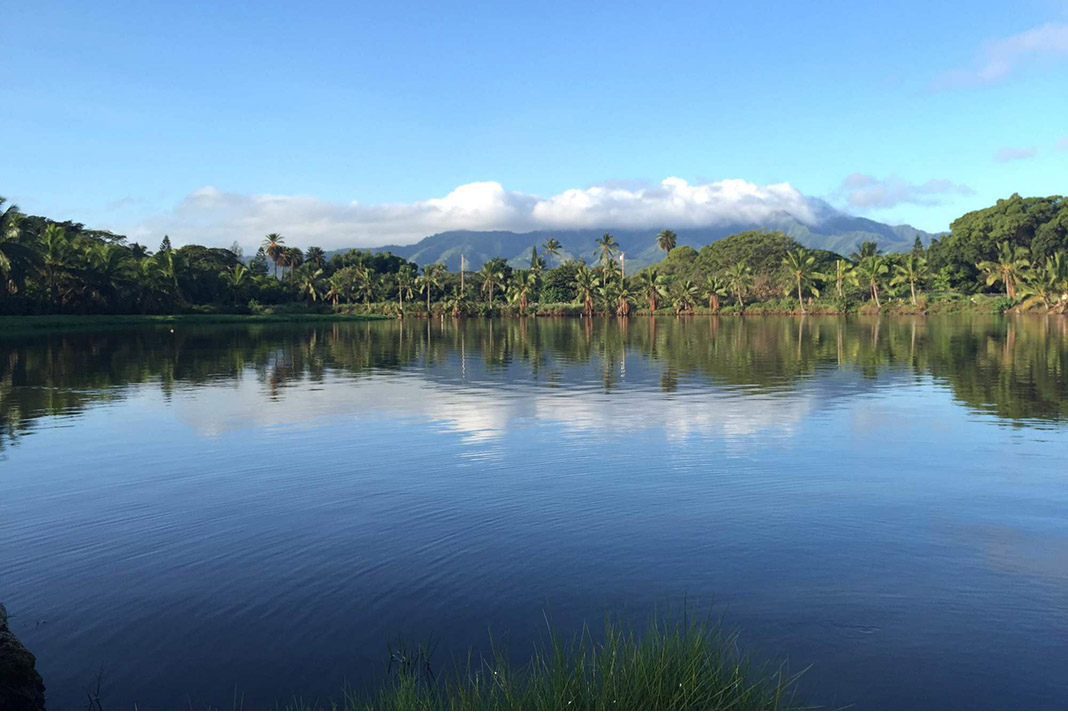 Today, Loko ea is on a path to restoration with the help of the nonprofit Mālama Loko Ea Foundation and their devoted community. The path to restoration has not been short, easy, or cheap, especially with the rules and regulations of these modern days. Loko ea has many achievements so far, and now restoring the quality of water at the pond is the priority. The extremely shallow depth of Loko ea is one of the last remaining hurdles to restoration as well as the biggest challenge for the nonprofit thus far. Increasing the depth of the pond to an optimal level will enable the development of healthy and diversified marine life for food production. After the health of the water is restored, the foundation intends to continue creating more food for the community and has developed a 5-Year Strategic Plan to become not only an abundant source of food but also a diversified food-shed for our communities.

Our island home, this place, and its people are what have kept Loko ea standing for the past 400 years. We plan to be here for the next 400 years. To do this, in an everchanging society and climate, we must also change and adapt. We must grow. Growing means gaining and respecting the wisdom of our kūpuna, understanding our everchanging environment, and thoughtfully moving forward. It means restoring and reigniting our ea. We invite you to support Loko ea as a commitment to mālama honua, care for our Island Earth.

Tasha Stiritz is a Member of Hui Mālama Loko I‘a who focuses on aquaculture and communications at Mālama Loko Ea Foundation.

Interested in joining the effort to restore life and independence to Loko ea?

As a Sustainable Member of the Mālama Loko Ea Foundation, you can make a recurring financial contribution of any amount. Recurring gifts reduce administrative costs and allow us to better forecast our finances. We are working to create a solid foundation, hoʻokahua paʻa. Whether it’s to pay for the restoration of Loko ea’s sacred water, our outdoor education tools for the kids, equipment needed for food production, or keeping our volunteers safe, your contribution will be used where it has the most impact.

In partnership with Loko ea, Patagonia has sponsored a limited edition, co-branded Patagonia X Loko ea outdoor shirt to share as a GIFT OF GRATITUDE to those who contribute at least $100 a year to Mālama Loko Ea Foundation as a Sustainable
Member.

The artwork, designed and contributed by local artist Dru Hara, carries the deep message of #RestoringEa and the breaking of a new dawn for Loko ea, loko iʻa, and ka pae ʻāina o Hawaiʻi.