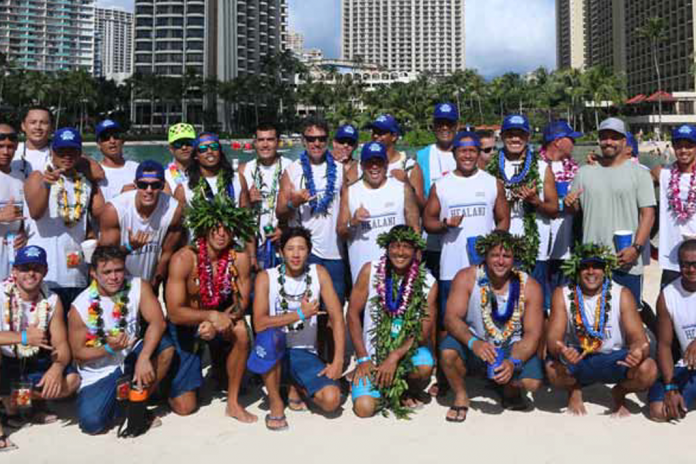 Twenty years ago, while on vacation from my advertising job, I had time to pass after I dropped my daughter off at school every day. Often, I would take a drive out to Sandy Beach and look across the blue Kaiwi Channel, towards the island of Molokai. I would sit on the rocky shoreline and day-dream about the people who crossed one of our islands most treacherous channels. The name “Kaiwi” means “the bones,” and the ocean there has so many different hues of blue. The deeper it gets, the more beautiful it gets, adding to the assortment of blues that is uncommon in our daily lives.

As I sat there, I wondered about the swimmers that have conquered her, and about those who have been conquered by her. I thought about Eddie Aikau, who swam to save his fellow crew members during the infant stages of the Hokule’a. I wondered about the men and women who annually make the trek in the Na Wahine O Ke Kai or Molokai Hoe, across this great channel. I would sit there in awe of the accomplishment of crossing from one island to an-other.

During that vacation week, I made it a daily ritual to start the day at Sandy Beach, sip-ping my coffee, while I enjoyed watching the ocean at the Kaiwi Channel. I sat and enjoyed the salty breeze for hours. For me, canoe paddling was just a dream back then. At the time, I was more into surfing, and had very limited experience in an outrigger canoe.

It seems like only yesterday, and since then, a lot has changed. In 2004, after leaving the job and taking a chance on a dream, I started this magazine. I did the photography, attended surf meets, grand openings, and yes, took photos of people that would grace our covers. Often I noted that it was the canoe paddling regattas and channel crossings that looked appealing. Everyone on the shore would be having a great time, and I wondered if I were missing all of the fun. I began canoe paddling with a club, and even started one-man canoe paddling, as well. I learned that, with the one-man, there wouldn’t be any crowd outside the surf line. That was ten years ago, and I haven’t stopped until the most recent Molokai Hoe. This season, I started again as a member of the Healani Canoe Club, competing during the regatta season last year, and missing the distance season, due to a shoulder in-jury. From the start of our season, our crew worked hard and even harder being the elder “uncles” of the club. We trained even harder at every practice. I’ve observed that, as you age, you need to work three times as hard as the younger men, who are half our ages. I’ve discovered that one needs to work harder, because even when merely walking, knees crack and pop! At each practice, your body aches. You’ve seen it, when the older guys grunt or struggle to get from a sitting position to standing! Then there’s the recovery period. “The kids” are able shake it off by the time they wake up the next morning. The same cannot be said of “the uncles.” For the “geezers,” as we were affectionately called by the young’uns, it can take a few days. At the next practice, we would just remain stoic and say, “I’m good.” We’re men, and that’s what you’re supposed to say! We trained hard, and al-though during regatta our crew placed a few times, many times we came up short. We didn’t get discouraged, but kept it together and did the work.
The hard work paid off when we made it to the Hawaii State Canoe Champion-ships in Hilo. That was in August, and it was the second year that we qualified in the 40’s Master’s division. Yes, we worked our butts off, and did an okay job! 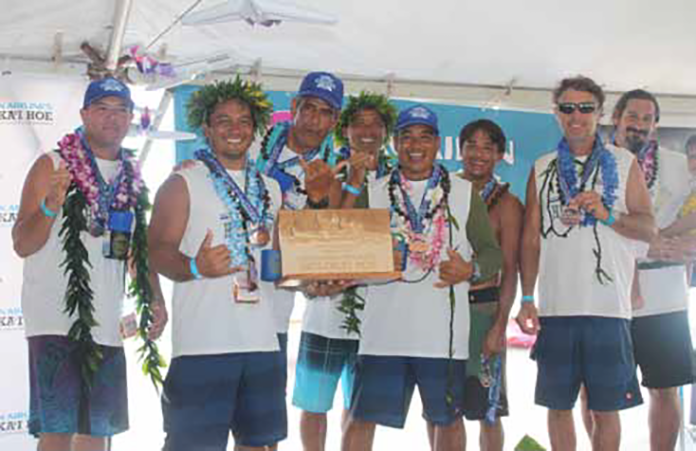 Our most recent journey started in January of this year. We planned on making a 40’s crew for the Molokai Hoe. We had seven paddlers for regatta, and made sure that everyone was coming to “every” race. It worked out perfectly, as some paddlers had family commitments, as well as business trips during the summer, so it worked out, and everyone was happy.

As the long distance season started, one of our paddlers needed to take care of concerns in his own busy life, and everyone understood.

We were now down to six paddlers and looking forward to the long-distance season. Long distance crews need nine paddlers, so we continued to assure each other that we would come up with three more paddlers for the distance races. As we searched, we asked our friends to join us. Many were busy with regatta and needed to get back to their already hectic lives, so we needed to search harder. In the Duke Kahanamoku Race, the first long-distance race of the season, we competed in the open division (all ages), because we were short one paddler needed to meet the age requirement of forty plus! Our “AARP” crew, promised to work hard-er at finding a “master’s-age” paddler.

We completed our crew with a paddler that had zero experience, had never been part of a team in a 6 man canoe, and had not even paddled in regatta. He had experience com-ing to regattas and helping set up and break-down, but zero paddling! We took a chance at his “tryout” during the Henry Ayau Race (from Hawaii Kai to Nanakuli). Gerald Hong (59) was brought into the crew, and he became the elder of the crew with the least experience. He trained with us prior to the race and held up just fine, and didn’t tire, as one would’ve expected. He never did a water change, and he learned really quickly during the race! With his newly won skills, fighting to the finish, we placed third in our division!

We finally had our crew! Our main steers-man, Scotty Del Ray (who can keep up with many of the “teeny-boppers” in the open crew), was over fifty-five, and our other crew-member who we imported, was Kip Mizushima, another silver anniversary pad-dler. Our crew’s younger members included our heavy-hitter, Joe Kanana, along with Brandon Ili, Marcus Edayan, Jacob Riveira, Jay Uyehara, from our Novice men, and myself, as the last of the silver anniversary members!

We trained with the open crew, sometimes keeping up and sometimes still trying, but we did the same mileage as the younger paddlers, and worked hard as a team. Our focus was on Molokai and we all wanted to fare well.

Although we had a crew with five forty-year olds, and four fifty-year olds, we took this crew, with over 400 years of life experience, and paddled to compete. We worked through the Kaiwi Channel, and when it came to relying on each other, our paddling brothers came through, and finished in the time we projected.

At the Ala Wai docks, our crew met once more to celebrate, remove our belongings from the escort boat, and to congratulate each other on a job well done.

After all of that hard work, there was one last surprise to conclude one of our finest hours. We were called to the medal stand to join in with our age group champions – 40 Masters Champions Na Koa Kona of Hawaii, and the second place team, Kailua Canoe Club. The Healani Canoe Club 40 Masters, had placed third, earning a bronze medal! At the presentation, we acted as though we had won the gold, because in our minds, we knew we had worked for it.

The whole experience brought me back twenty years earlier, to those days of sitting on the edge of the Kaiwi Channel. This time, with the joy of what it took, and what the hundreds, even thousands before me have experienced. Working together through the struggles and coming together for a single goal, doing the best you can, and being the best you could be. Both in the channel and out of it! It doesn’t get much better!