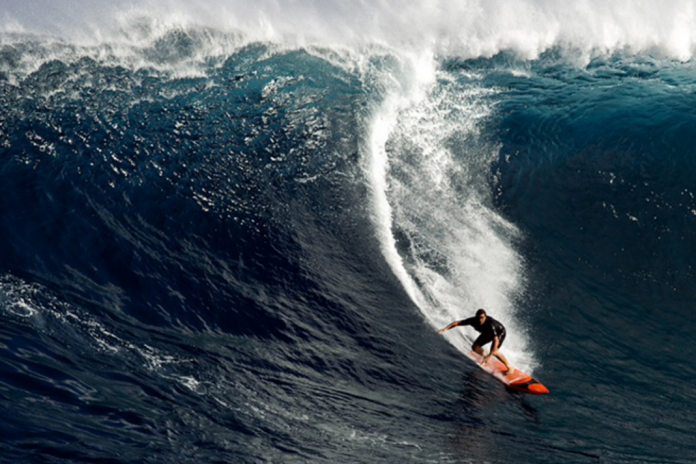 A goal of every big wave rider is being invited to the Quiksilver Surf Contest, in Memory of Eddie Ai- kau, at Waimea Bay. Ben Wilkinson finally achieved his life’s dream of being invited and surfing in one of the most prestigious events. This competition is only held when the waves are over twenty feet in height. The “Bay” would call the day, on whether the contest would be held. Legendary Waterman, George Down- ing, is the person who would have the actually “say” on whether the contest was on or not.

“Ever since I could remember, I’ve been surfing!” said Wilkinson. “I remember holding on to my dad’s neck while he caught a wave body surfing, and then standing up on his back as we rode the waves to shore.” The North Narrabeen (Sydney, Australia) surfer still remembers, “I can still feel his back be- neath my feet…”

“We lived in the caravan park across from North Narrabeen Beach, so I grew up swimming, surfing and fishing. It was an amazing place to grow up!”

The thirty-five year old recalls, “I feel like I was drawn here. I’ve felt a huge pull to come here since I was about ten years old.” When “Big Ben” was sixteen years old, he saved up his paper and milk run money, which he had been saving for years, and bought a plane ticket to Hawaii. With a quiver of boards and enough money to last the month of February, he stayed at the old Sunset Backpackers.

“I was always dreaming about competing in “the Eddie,” and it was the first time I surfed Waimea Bay.”

The young Wilkinson would continue to build his confidence by surfing “maxed out” Sunset Beach. “By chance, I met legendary shaper Jeff Bushman. He noticed my North Narrabeen Board Riders shirt, and generously offered me a “gun” (a long and nar- row surfboard used to surfing gigantic waves) to borrow, and to surf “the Bay.”

Near the end of his surf trip, Wilkinson had the opportu- nity to surf Waimea Bay. He caught a “bunch of waves on Ross Clarke-Jones’ ten foot board,” and has been hooked ever since”

The ever-talented Wilkinson, also known to friends as “Wilko” and “Big Ben,” whose passion for huge surf doesn’t just stop in the enormous waves, is also known for his love of paddling. Starting ten years ago, Ben began paddling with the North Shore’s Manu O Ke Kai Canoe Club. He recently completed another Molokai Hoe, with great results, placing with his team in 12th place overall.

“A mate of mine, Smitty from Tahiti, suggested that we go and train during the summer, which is the off season for big wave surfers.” It keeps him fit for the strength and stamina needed for surfing monster waves.

Wilkinson is a carpenter by trade, finishing his apprenticeship upon returning from”
“his 1999 “taste of Hawaii” visit. Wilkin- son did carpentry for seven or eight years before embarking on his current passion of building furniture. The pieces he builds are actually works of functional art.

“I started building some pieces of furniture for my own home, here in Hawaii, and the rest is history…”

“I always dreamed about working with big beautiful slabs of wood, but being a carpenter and competing on the big wave tour, made it difficult to receive time off. So, when I needed to travel, I would need three or four days sometimes, to travel to the other side of the world. This was in order to chase the huge swells. Although my employers would allow me the time off, often when I returned, my jobs would be gone.”

“I started building some pieces of furniture for my own home, here in Hawaii, and the rest is history. I have always believed in chasing your dreams, and putting big dreams and ideas into the universe.”

Ben explained his desire to build slab furniture. “In the very beginning, my paddling mate’s dad gave me a call, saying in his Australian accent that his mate had some slabs he no longer needed. That was the very beginning!”

“The woods here in Hawaii are very different from the area where I grew up. We have some beautiful woods in Australia, but I love the tropical woods that grow here in Hawaii.”

Wilkinson added, “My favorite woods to use here are anything salvaged and saved, from the dump. I also use invasive species, like Monkey Pod. Generally, I work with trees that have to get cut down because they have become dangerous, or are growing where construction is starting. I get asked this question a lot, but if a tree is perfectly healthy and doesn’t need to be cleared or cut for some reason, then I won’t cut it down just for the wood. There are definitely trees that I salivate over and wish I could use, but I love beautiful big healthy trees too!” The Wilkinson family here on the

“My favorite woods to use here are anything salvaged and saved, from the dump. I also use the invasive species, like Monkey Pod”

“We generally keep a pretty low profile here on the North Shore, but it has gotten a lot busier than when I first came here, back in 1999. There is nothing we can do to stop people from coming to see this beautiful place, which we are so lucky to live in and enjoy. You just have to get up a little earlier, and stay a little longer, to enjoy the spots we love.”

“I don’t have to go far to surf one of my favorite spots. Haleiwa is just down the road and my gallery and workshop are just a few steps out my door.” 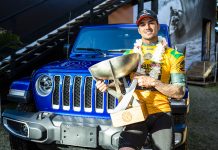