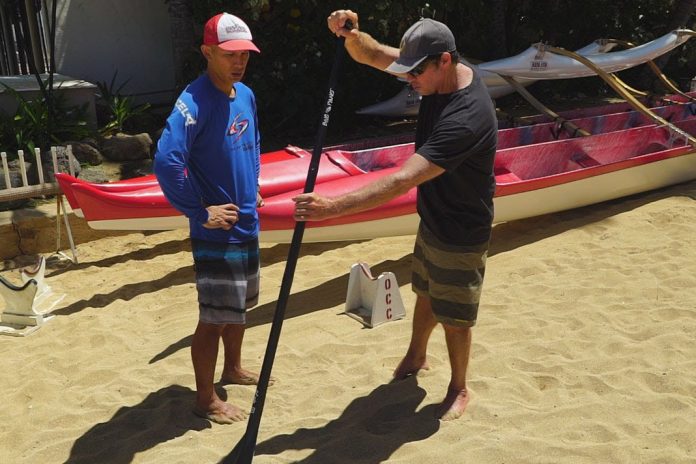 We could be standing right next to you, and you wouldn’t know it. However, behind those sunglasses and cap is one of the most influential people in canoe paddling, not only in Hawaii, but throughout the world! Johnny Puakea has attained world renown for his paddling technique, his elaborate, yet functional and innovative canoe design, and above all, as a decent human being. With his reserved demeanor, he appears a man of few words, but ask him a question or two about paddling, and he’ll gladly respond, and more. This “akamai” (smart with wisdom) waterman, John Puakea, has been a paddler, in both canoe or Kayak, a canoe designer, a paddle designer, a paddling coach, surfer and a businessman, who always makes the time to advise with a paddle tip or two.

Johnny is the son of legendary canoe builder Bobby Puakea. He has learned all that he could at his dad’s side. Puakea explains,“I grew up around my dad and grandfather Robert, who were both Koa canoe builders. My dad was always reshaping canoes and trying to make them faster. Sometimes they worked and sometimes he had to redo stuff.” Puakea continued, “I learned a lot there, I think. We always spent time together trying to figure out new design ideas, and trying to figure out what makes certain things work and others not.” Puakea is instrumental in modern one-man canoe design. “When I start shaping all my one-mans, I always ask my dad to come take a look at what I am doing. If he hesitates before he says anything, I know I’ll have to redo something. I did this with all my designs except the Pueo” (his top-performing designs include the Kaimana, the Kainalu, the Pueo 1—and the new superstar, the Ehukai—OC1 10 MAKAI OCEAN LIFESTYLE MAGAZINE NOVEMBER/DECEMBER 2016 canoes). Many people are not aware that Puakea actually shaped the success of the Pueo. “The Pueo was a fun project for me.” He discussed how he received an extraordinary sign from nature. “When I was designing that canoe, I did it in my shop on the North Shore, and I wouldn’t let anyone see what I was doing. The guys would ask to see it, but I kept it (behind closed doors) and when it was done, I let them see it.”

He continued, “While I was designing the Pueo OC-1 canoe, I saw a lot of “Pueo” (Hawaiian Owl), which is our family ‘amakua,’ or guardian, so that’s where the name came from.”
With technological advances and programs to aid in canoe design, Puakea explained, “With the Ehukai, Kahe Kai and the Malolo, I am doing most of the work on the computer, with the help of Mike Giblin. That has been something I’ve enjoyed. “

Raised on the Windward side of Oahu, along the shores of the Koolau, the future legend started paddling at an early age, around 1978, with Ko’olau Canoe Club. He started coaching in 1989. He explained, “Like many other keiki growing up in Hawai’i, I tried the usual basketball, baseball and football, but I took to none of them. I spent most of my time surfing and then got into paddling.”

During those years, his talent gave him an opportunity to train for the Olympics, as well as the opportunity to compete. Johnny recalls, “I started to train for the Olympics in 1986, and it was a really good experience! At the time, the United States had some of the best coaches in the world from Europe. The level of training and the mentality was above and beyond what I could’ve imagined.”

When asked what other sports he enjoys, Puakea reflected, “Besides paddling, I would say surfing. I have a lot of friends that are in the industry. John Pyzel is a good friend, and he’s been with John John (Florence, 2016 World Surfing League Champion) for a long time. So, I really enjoy watching all that is happening with him, and the level of surfing, well, it’s truly incredible!”

Puakea resides in two places. He splits his time here in Hawaii with the remainder of his time in California. He calls both places “home.” When asked which he prefers, he replied, “There are things about both places that I like. California has a really good paddling community that is trying to push the sport of paddling forward. There is a lot of influ-ence from some of the Tahitians, which I enjoy, and they are also really excited about the whole “unlim-ited” thing. The Californians are really embracing the progression and future of our sport.”
He continued, “Hawaii, to me, is home. I love that you can be in the water doing something really fun within a couple of minutes: surfing, swimming, or a downwind run, and then top the day off with some music and barbecue! It’s hard to beat that, in my mind.”

“Last year was a bit busy with living in both places. I was working with a few teams, along with clinics. Most of my energy in this last year went into the Dana Point women in southern California, and Outrigger women here on Oahu (runner-ups in the 2016, Na Wahine O Ke Kai). I also spent some time, earlier in the year, with the junior boys group from Hui Nalu, and I always help the Newport Aquatic Center guys when I can. It’s all fun!”

Puakea has been instrumental in guiding many of the top paddlers in the world, including victories with Team Bradley in the Na Wahine O Ke Kai. He started about nine years ago, going for four years straight, and taking a break a couple of times. “They are like family, and are always a pleasure to work with. We had a number of Molokai wins, and that’s always satisfying after all the hard work. Kelly Fey works with them now, and is doing a great job!” He has also had success with Kaiwi Channel OC-1 World Champions Danny Ching, Lauren Spalding and Jimmy Austin. “Lately, I have been helping Daniel Chun and sixteen-year-old Harrison Deisroth. “Honestly there are many more, but I am really liking watching some of these young guys come up.”

When asked what he does for his personal training, he replied, “I am not big into cross-training these days, although it is something I always “put on” my athletes that I train. Weights, running, swimming are all good, and they are things I used to do. Now paddling for me is just fun. I love it!”

“I think it is possible (to win the Molokai Hoe), but not until we really take a good look at how we see and approach the sport of paddling.”

When asked whether the “Hawaiians” will ever win another Molokai Hoe, and whether “corporate sponsors” were needed, he said “I think it is possible (to win the Molokai Hoe), but not until we really take a good look at how we see and approach the sport of paddling. I don’t know if I’ll ever see that (corporate), and that’s kind of sad, because it is our state sport. I don’t think that’s what we really need to do in order to keep up or beat them. I have Photo courtesy Puakea Designs …“They (the Tahitians) ‘live to paddle,’ have unbelievable efficiency in their stroke, and are very passionate about the sport. They wake up early and train, then they go to work, get off from work, and train again. It’s a lifestyle. They have taken this sport to another level, and I think it’s great!”

Fiji Paddling on the Rise

Island Native: Vaimana Conner – A Man of the Land, Sea and Air…He’s got...