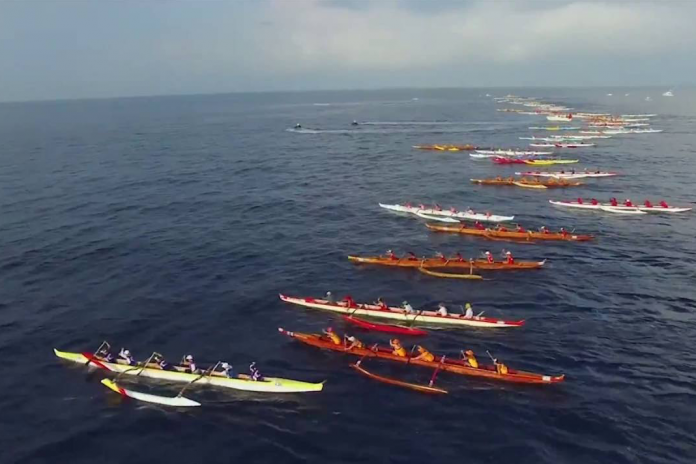 Outrigger paddling is a charismatic sport. It’s hard not to be struck by the majesty of a fleet of elegant and aerodynamic boats propelled by fluid, synchronized movements. We are lucky to have such a developed and competitive paddling community in Hawaii, but could be faulted for being overly focused. With the obvious exception of Tahiti, the Hawaiian outrigger racing community has little visible interaction with South Pacific nations that share in the paddling culture. And that is to every-one’s detriment. Every nation, island, and coastal village has its own relationship with paddling, which should not be generalized. Therefore, I will only speak to what I know, which is the workings of the Fiji Outrigger Association, based in Suva, Fiji.

Fiji is not exactly a paddling powerhouse of the Pacific. The competitive association consists of between three and seven clubs across the nation, depending largely on recent effectiveness of management. But this perhaps demonstrates the tenacity of the community better than anything, as diehards continue to show up week after week, season after season, year after year, to train in earnest and race with every fibre of their being, no matter if it is against two or twenty other boats.

Fijian paddlers are aware of the Hawaiian-Tahitian dominance of the international scene, and those who have had the opportunity to train abroad return to disseminate their new knowledge freely to unwaveringly eager ears. Meleti Kolikata was one of the first generation to turn paddling into a modern competition in Fiji, until he eventually moved to Tahiti for work. Eight years later (and now at a different international job), he still donates one-on-one time to every enthusiastic team in Suva, re-introducing Tahitian techniques and drills, whenever he returns home for holidays. The sudden jump in caliber leaves many young paddlers wide-eyed and realistic about the differences in expectations between their and Tahiti’s competitive circuit.

And yet, the international rankings do not, ultimately, phase Fiji’s paddling community. They continue to paddle in locally produced canoes that are built to traditional specs, rather than updating the molds for performance enhancement at the expense of their heritage. I will say from experience that these boats suck at regatta turns. It is not uncommon for crews to address the issue by having seats three and four actually stop paddling during a turn, to avoid over-shooting the outside buoy. Compared to a Mirage or Bradley, the most easily produced Fijian mold, the Mana, has less curvature to the manu, and a raised cradle where the iako attaches to the hull, neither of which make open ocean paddling particularly comfortable. Other canoes are even simpler, with stick straight iako and an ama shaped like a banana. But the models make sense locally, where extensive barrier reefs produce lagoon conditions more often than not. There is also a tangible thrill, even as an outsider, when a homemade sailing canoe passes by with uncannily similar rigging features.

Granted, choosing tradition over competitive edge does not mean Fiji lacks a sense of competitions. We are currently in the heat of the V1 (because there is no such thing as an OC1 here) distance season, with races ranging from four to ten miles. There are more paddlers than functioning V1s, so races are held in seeded heats. There is also a larger game at play right now, with the South Pacific Games (SPG) scheduled for next July in Noumea, New Caledonia.

The South Pacific Games (SPG) are the Olympics for the Pacific. Most of the sports are the same, but you can forget gymnastics and synchronized swimming; this event features two types of rugby (sevens and league), weight lifting and power-lifting, and of course five different paddling events (V1 and OC6 marathon and sprint, and sometimes even a V12 option). The competition is heavy, and so are the medals. Okay, well, in all fairness, Tahiti runs away with all the golds pretty much every time.

But, other than that, the fourteen nations of the South Pacific compile all-star teams that train for years with this race as their ultimate goal. In fact, just this month, the Fiji Outrig-ger Association initiated its 15 month selection program leading up to the Games.

Paddling is part of the Pacific identity, not just Hawaii and Tahiti. Indeed, many of the nations that rarely send crews international for competitions are the most intrinsically linked to their va‘a. Actually, the relationship is arguably somewhat causal, as peoples who genuinely rely on their canoes for fishing and transport* often have more pressing concerns than proving their prowess to hoitey-toities in shiny Mirages. But I digress (and am very presumptively putting words in others’ mouths).

Let’s try again: the love and pride of paddling is pan-Pacific, and limit-ing our international awareness to the Hawaii-Tahiti competition will only cause the sport to evolve unevenly. Interfacing with individuals and clubs from other Pacific nations would inevitably bring unexpected enlightenment to all sides. Island time (think Hawaiian time plus 2 hours) makes holding competitions in South Pacific nations much more arduous than necessary, and I firmly believe that experiencing a tightly organized regatta would inspire many race coordinators to aim higher in their aspirations of event organization. Meanwhile, there is something starkly and embarrassingly novel about the humility, practicality, and flexibility with which many Islanders approach organized paddling. In our ever-shrinking and increasingly accessible world, there is no excuse to not actively unite the Pacific through an activity that anthropically defines the region.

And this is the perfect time. With the SPG on the horizon, clubs and governments across the South Pacific are looking farther and dreaming bigger than they would otherwise dare. And with the local regatta season picking up steam, plus another Kaiwi Channel crossing never more than a few months out, it’s always a good time to show off Hawaii’s vast and competitively mobilized paddling community.

If Hawaii is going to be a well-rounded member of the Pacific paddling family, it cannot merely act like the haughty teenager that will only interact with the ‘cool’ relatives. We need open and earnest cultural ex-change with all of our South Pacific cousins. Thus I encourage everyone, on a personal level, to reach out to your cousin’s cousin in the southern hemisphere, and start the conversation. Because, once you get an Islander talking, pretty soon their uncle’s cousin’s nephew on their second mother’s side is fixing your leaky sink, while Auntie makes everyone tea and the kids are exploring how hard they can bonk each other on the head with your paddle (true story). These are beautiful cultures, and everyone misses out when we do not connect with them. Especially over paddling.

*This is not an uninformed, trope-based statement. Individuals from Fiji, Tonga, and Samoa have all voluntarily identified themselves as paddler to me, prior to clarifying that they meant they grew up fishing from canoes in their villages.

A New Dawn for Loko Ea

Fiji Paddling on the Rise