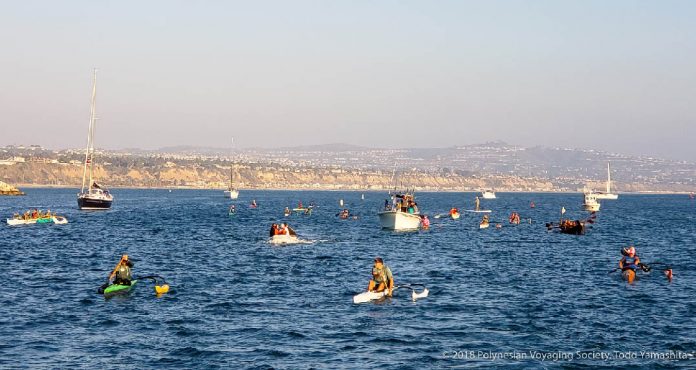 Dana Point, CA – More than one hundred canoe paddlers, boaters and other water enthusiasts converged outside Dana Point, California to escort the Polynesian voyaging canoe Hikianalia and crewmembers into port after sailing in from Avalon Bay on Catalina Island. Acknowledging Hawaiian custom, crewmembers chanted outside the breakwater at Dana Cove, requesting permission to land in port. From a tribal canoe, members of the Acjachemen Nation, greeted the voyagers who proceeded into port at Ocean Institute where more than 1,000 supporters were waiting to welcome the canoe.

“We have a saying in Hawaiʻi, he waʻa he moku, he moku he waʻa, our canoe is an island, our island is a canoe,”  said captain Ellis. “As we live these values of sustainability, of taking care of our ocean, taking care of our island, we look to the canoe. Everything we have and need is on that canoe… like that canoe, this is the only Island Earth we have and we must take care of it,” he added.

During the one week stop in Dana Point, the crew will host crew presentations, screenings of Disney’s Moana, and dockside canoe tours which will give the public an opportunity to learn about traditional Polynesian voyaging and the mission of the Polynesian Voyaging Society’s Alahula Kai o Maleka Hikianalia California Voyage.

Schedule of Events for Dana Point

12:30pm Moana Film Screening at Ocean Institute – Free and Open to the Public

After a 2,800-mile voyage from Hawaiʻi to Northern California using traditional non-instrument navigation, Polynesian voyaging canoe Hikianalia and her crew have been sailing down the coast of California. On Oct. 30, Hikianalia is scheduled to depart Dana Point for San Diego where the crew will visit for approximately two weeks before concluding their California tour. The weather window to return to Hawaiʻi begins Nov. 15 around which time a fourth crew of voyagers will arrive from the islands to replace the current crew. Below is a tentative port schedule for the California Voyage. Please check www.hokulea.com, Facebook, Instagram and Twitter for the latest updates: