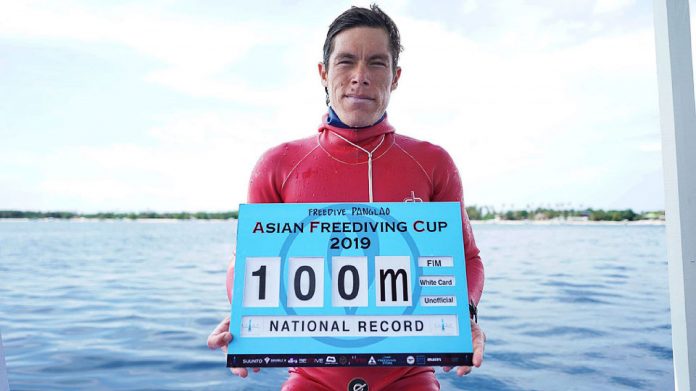 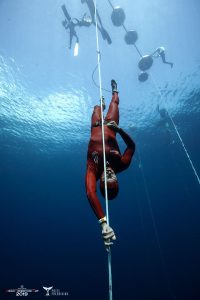 Panglao, Bohol, Philippines.  Kurt Chambers, a freediving instructor based in Kailua-Kona, Hawaiʻi, has just set two new U.S. national records in the sport of freediving—swimming to depth on breath-hold.  He accomplished the feats at the Asian Freediving Cup, just held June 9 – 11 in Panglao, Philippines and organized by the instruction agency Freedive Panglao.

On day 1 Chambers accomplished a performance of 98m/321ft with a dive time of 3 minutes 7 seconds in the ‘constant weight bi-fins’ discipline.  Among the four disciplines in modern depth competitions overseen by AIDA (International Association for Development of Apnea), this is the only one that allows the use of standard bi-fins, the same long-blade fins most recreational freedivers and spearfishermen rely on.  2019 is the first year the use of bi-fins has been distinguished from monofins by AIDA, which have instead been employed for nearly all ‘constant weight’ dives in competitions for the last 20 years.  This new development has prompted a resurgence of interest in depth training with bi-fins and allowed for a surge of national and world records to be set in the new discipline this year. 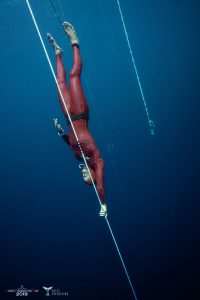 The previous U.S. mark of 78m/256ft was set in April by Kauaʻi resident Elijah Aasand at the Xibalba competition in the cenotes of southern Mexico.  Aasand was not too sore about losing the record to Chambers, who was Aasand’s first freediving instructor in 2013, so the two have been long-time colleagues.  In addition to Chambers’ deepest bi-fin performance, in the female division a new world record of 92m/302ft was set the same discipline by Slovenian Alenka Artnik.  Chambers’ mark of 98m/321ft is the third deepest bi-fin performance in competition in the world this year behind the shared world record performances of 108m/354ft by French Arnaud Jerald and Russian Alexey Molchanov just weeks ago in Egypt.

Chambers followed this with yet another national record dive on day 2, in the discipline of ‘free immersion’, which allows pulling along the line but without any aid of fins.  He descended to 100m/328ft in 3:19, improving on his own record of 96m/315ft set in November in Dominica. 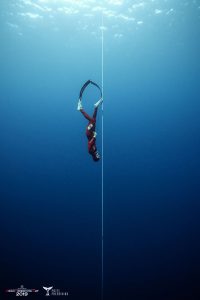 Weary from the back-to-back deep dives of the first two days Chambers opted to be conservative and “just have fun” on the final third day of the competition, in which he had to perform a ‘constant weight no fins’ dive, generally regarded as the most challenging of all the disciplines for no assistance being allowed from either grabbing the line or wearing fins (a modified breaststroke is typically used).  Chambers was actually in the overall lead by total points among all 61 athletes in the competition after the first two days, but due to his conservative final performance he conceded to four-time champion of the competition, Sendoh Wang of China.  Chambers still placed 2nd overall in his first competition in Asia.  “This result was absolutely beyond my expectation, in the face of some very strong international athletes as well as a massive field. I am proud that my month spent training in Panglao was rewarded with these honors. It is also a testament to how favorable the circumstances were and organization was by Freedive Panglao.”

Almost more challenging than the dives, for Chambers, was just getting onto the roster for the Asian Freediving Cup; it is such a popular event in Asia that when the entry opened in December all 75 available slots were taken within just two minutes.  Chambers was fortunate to be in Dominica at the time (for another freediving competition), where the time difference allowed registration at the reasonable time of 8am.  “I have never been able to sign up the last few years because I would have to try to register at 2am in Hawaiʻi!” Chambers mentioned.

Freediving, though popular in Hawai’i as well as areas of the mainland U.S. as a recreational pastime, continues to be relatively obscure as a sport here, whereas in other areas of the world, such as many European and now Asian countries, thousands of divers avidly train for and compete in it.  “It is a shame that such a respectable sport continues to endure relative obscurity in one of the most athletically competitive countries. At the Asian Freediving Cup I felt like I was watching the growing dominance of the Asian contingent over us right before my eyes.”  Chambers attributes the low participation and support for freediving in the U.S. to the obstacles of excessive concern over liability and general lack of awareness.  “Freediving isn’t exactly a sport introduced in high school here.  Most of us wander into it by getting into spearfishing or snorkelling first.”  Regarding liability, Chambers points out that there is a great misunderstanding about the risk in training and competing freediving: “In the 25 years of the modern competition format there has not been a single fatal accident attributable to hypoxia in our arena. We practice safe strategies and have effective protocols for protecting ourselves in our training and competing.”  Chambers shares that all students of freediving classes learn these straightforward strategies on the very first morning of class.  “In spite of how safe we have demonstrated our sport to be for over 20 years now, we continue to not be allowed to train or teach in our public pools and struggle to put on competitions here because of the misperceived liability. I really hope officials in the right places take notice of our dilemma, as USA Freediving will continue to fall behind the rest of the world in this rapidly growing sport due to our obstacles.”

Chambers shares that efforts are underway for the sport of freediving to actually make a debut in the 2024 or 2028 Olympics.  “We will prepare for the tremendous opportunity in spite of the challenges in our way here.” 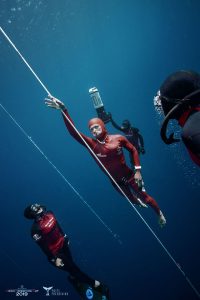 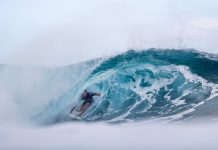 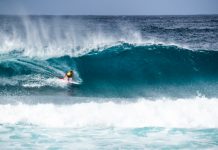