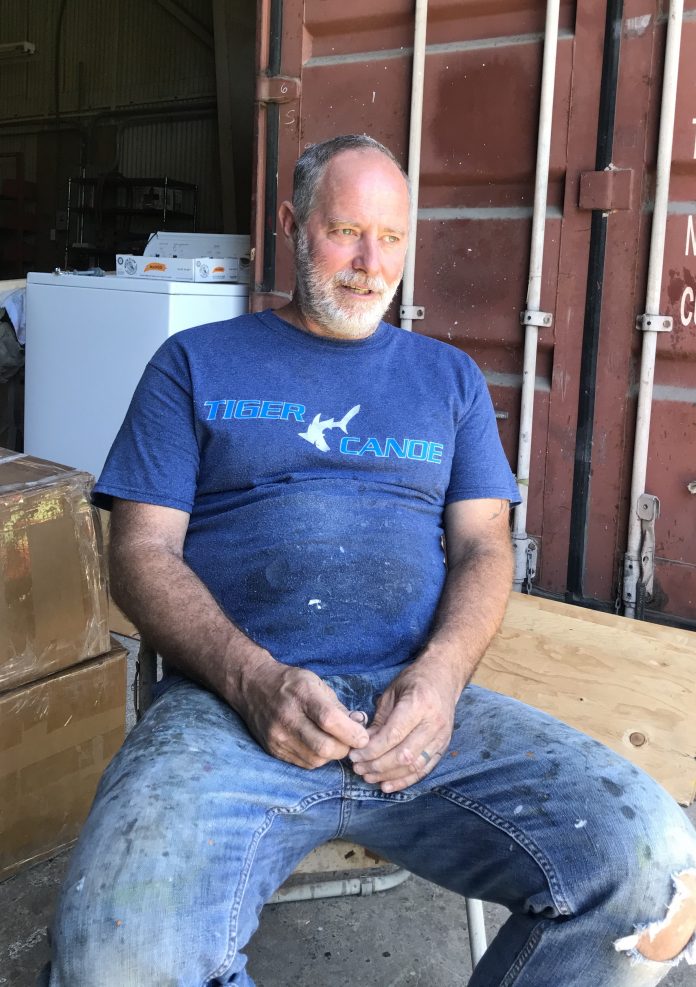 There is a tiger in North Kohala. No, this “tiger” is not a wild one. He is actually busy each day, building canoes for a living. March “Tiger” Taylor lives just past Hawi, on the island of Hawaiʻi, in Kapaʻau.

I first met Tiger on Oahu, when he was delivering a trailer full of V-1 wa’a or one man, rudderless outrigger canoes, at Kualoa Beach Park for the annual “Race Around the Hat.” 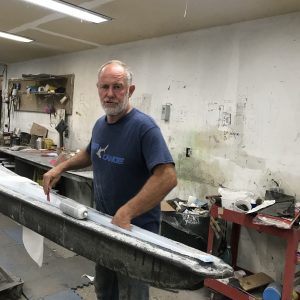 This race is solely for V-1 Canoes, and its route is around Mikolii Island (formerly known as Chinaman’s Hat). One would think that the signature builder of these beautiful, sleek racing wa’a (va’a in Tahiti) would sit back and simply let the others help unload the trailer. There he was, right in the mix, as he and the race promoters unloaded the canoes.

Tiger resides in North Kohala, which he describes as “heaven on earth, steady wind, and healing rain.” He enjoys life there with wife Annlee. They met for the first time around 2010. “I would watch her daughters while escorting/coaching the Kai O’pua Canoe Club women. Years later, we reconnected, and are now married! She has always been a great supporter of what I do. We have four daughters, Kainani, Emma, Chloe and Claire, and two grandchildren, Kaha and Grace.”

I finally had a chance to make it over to Hala’ula, to visit the master craftsman himself. At first, I thought there would be a bunch of people racing around a shop, building, sanding, and polishing the canoes. Imagine my surprise to find Tiger, setting up a “layup” ready for vacuum bagging, which is one canoe in a mold, ready to have air removed to consolidate the lamination. 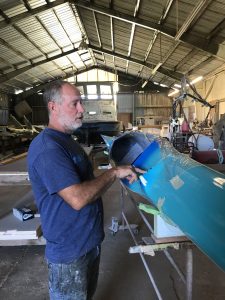 The canoe manufacturer and design genius, constructs perhaps one of the best built V-1 canoes around! He constructs one-man, four-man. and six-man canoes in his warehouse, in northern Kohala. To promote the sport of V-1 racing, he lets racers (and wannabe racers) utilize his quiver of Fai 3x V-1 wa’a. These designs were created in Tahiti, as Taylor was approached and licensed by Fai Vaʻa, to manufacture the V-1 in the United States.

Every one of Tiger Canoes and watercraft are built by the master himself, not mass produced, and each painstakingly crafted, one step at a time.

Tiger was born in Kailua, O’ahu, but his ohana (family) moved to Kona from Kailua. He grew up helping out at his family’s business, a bustling body and fender shop in Kona. Tiger graduated from Hawai’i Prep Academy, and he then attended and graduated from the University of Denver in 1990, with a bachelor’s degree in business administration.

“I had originally wanted to study industrial and automotive design/engineering, but it didn’t pan out.” He added, “I worked for the family’s automotive collision repair shop after college, and since I was raised in a body shop, I always had access to tools.”

“I’m told that I was quite the inquisitive child, and with some type of knowledge of repairs, I was able to repair my surfski and other equipment. Curiosity got the better of me, and (one day) I opened up my surfski to understand how it was built. One thing led to another.”

“I’ve been messing along with canoes and surf skis since 1992, and I went on my own in 1998. Prior to that, I worked in the family’s collision repair shop, Auto Body Hawaii, and built canoes under license from Outrigger Connection. Karel Tresnak has been a good friend and invaluable teacher. Prior to that, I learned considerably from a Horizon 26 OC1 mold, which was purchased from Walter Guild. Brent Bixler built that tooling, and he has been a mentor ever since'”

After the successful Pahoa OC-1 was produced, there was a mainland project you worked on a few years back? I only heard that you made a truck body or something like that for a race.

“When I moved to California in 2004, it was real slow-going trying to get my shop up and running. California is not business friendly when it comes to trying to open a shop that has fire and air quality concerns. I had to work to support the family, so I was fortunate enough to be asked by Pflueger Racing, to build a fiberglass body for the trophy truck they were developing. That helped considerably until the shop was up and running. It wasn’t difficult work, tiring certainly, but the commute to work was. I would drive eight hours from the foothills of central California to Temecula. I’d stay in a motor home just outside of the shop. Long hours, away from home for a week or two. Then, drive north and try to work on the shop, then back down south to build the race truck body. A great experience to work in the same medium, but with a different product.”

Asked if there were any projects in the future, his reply:
“I will say that I have a particular project in the oven, but no more than that!”

For recreation, this perfectionist enjoys working, and piddling around at the shop. I love to tinker on my dirt bikes or maintain the shop. However, working up at our land is equally satisfying. Annalee and I have three acres above Hawi, with a beautiful view of Maui and the Alenuihaha Channel. We are building a home there. Lots of landscaping and constant mowing, or tending to the trees. I enjoy swimming, but confess that I’m not as diligent as I should be. The coronavirus doesnʻt help with all the parks and pools closed now. Poor excuse, though.” 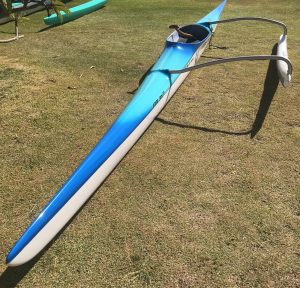 For someone who is interested in getting into production of this magnitude, Taylor advised, “All this new technology with CAD/CAM and 3D printing is opening up all sorts of new ways to develop, and rapidly develop, new prototypes and products. Learn the skills to design and build with the new technology. I really commend what Keizo and Luke are doing at Kamanu Composites, in utilizing the new tech. I’m doing it myself, but rely on the experience of those in the required fields. I’m behind the curve with learning all this new stuff but I do recognize its value.”

Taylor says “Pursue your own dream! And when you do, always do the best work possible. Aspire to continually evolve, to make a better product. But most of all, just be a good person. Be a giver and not a taker.”

Kaihe’s Korner: What to do After Catching ” The Bump”