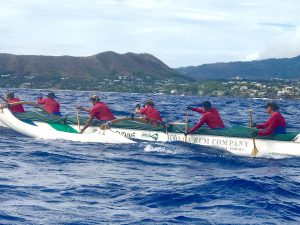 “… capitalizing on diversity is perhaps even more important when it comes to the characters of the oarsmen. A group composed entirely of eight amped-up, overly aggressive oarsmen will often degenerate into a dysfunctional brawl in a boat or exhaust itself in the first leg of a long race. Similarly, a boatload of quiet but strong introverts may never find the common core of fiery resolve that causes the boat to explode past its competitors when all seems lost. Good crews are good blends of personalities: someone to lead the charge; someone to hold something in reserve; someone to pick a fight; someone to make peace; someone to think things through, someone to charge ahead without thinking. Somehow all this must mesh. That’s the steepest challenge. Even after the right mixture is found, each man or woman in the boat must recognize his or her place in the fabric of the crew, accept it, and accept the others as they are. It is an exquisite thing when it all comes together in just the right way. The intense bonding and the sense of exhilaration that results from it are what many oarsmen row for, far more than for trophies or accolades. But it takes young men or women of extraordinary character as well as extraordinary physical ability to pull it off.” – Boys in the Boat

I agree with this quote I received from team member Kathy Erwin, but wish to differ with the beginning of that last sentence, “But it takes young men or women . . .” To accommodate the sport’s ever progressive evolution, this year’s 41st annual, Na Wahine O Ke Kai race took two huge steps by introducing new sanctioned “firsts”. The first step, joining, the 2 original canoe divisions, the koa and spec division was the “non-spec” unlimited canoe division. The second step, which brought women such as myself from grazing in the pasture  and back to the octagon, was a new age group division, the 60+ division.

Sixty year old women are not much different than any other younger age group paddlers. You would think that by 60, personalities would change. Our hard edges would have softened like our waists and we would be mellow like doting kupuna. Wrong. The fire of competition checks one’s  growing mediocrity. Racing sharpens our edge, making it unbearable to live with us during distance season. We still deal with politics, logistics, admin duties, fund raising, balancing family priorities and perform whatever it takes to get to the starting line, to be competitive, to be a contributing team member, and never the weak link.

Be clear however, this 60+ age division does have both glaring drawbacks and time sensitive benefits. First, there aren’t too many who can still get in the boat . . . fast.  Second, most clubs cannot field an entire 12 person distance crew. Many are newer paddlers and don’t have the water time and haven’t competed at a high level.  Like it or not these two natural occurring age specific factors immediately makes the “cut” a little simpler in separating bully girls from aunties. As sixty year olds assessing this situation we all realized we could choose to either throw together crews and continue beating each other and ourselves up or seize the opportunity to join forces. Fortunately in this situation with age did come wisdom and we chose to join forces. What a new experience being on a crew with paddlers I’ve been competing against my entire career since 1968. We really need to thank Vanessa Weiss of Maui for first approaching the Na Wahine committee who agreed, the time had arrived to create a 60 year old division and secondly for extending the olive branch from Hawaii island to Kauaʻi to form our crew. Mahalo Vanessa.

One of our crew’s achilles heel was our collective individual strengths, a two sided coin, as our strength could have easily worked against us. Collectively there was a dizzying accumulation  of over 200 channel crossings (Vanessa herself completed 37). Our crew had members on winning channel crews in every age division from open, 40’s, 50’s and 55’s, spec and koa canoes and have raced not only Kaʻiwi, but every Hawaiian channel on various canoes, OC-1’s, OC-2’s, OC-6 in change and iron races and 4 and 6 man sailing canoes. Our crew members have won national and international distance races as well countless local, national and international regatta sprint races. With talent like Paula Crabbe and Jane Mckee, many members could effectively sit in multiple seats, up front stroking or in two, sitting in the middle of the canoe or steering. We had combinations for whatever  Kaʻiwi presented. Coming with history, egos, emotions, rogue testosterone and hormone levels, the savior who kept this crew in check was Kawika Goodale our channel coach and a hana hou channel coach for me of my Kaua’i Canoe Club 1980 Na Wahine race that was canceled due to high surf. Mahalo Kawika, your confident manner effectively put us in our place and on the podium.

We were fortunate to win.  I know so many legendary 60+year old paddlers that continue to paddle and win younger divisions, like the Kailua Women 55’s. Every island has their “sleeper” competitive 60 year old women hibernating in clubs. There are also competitive national and international crews.  I’d like to recognize my shimmering sparkling Oliliko team mates, the name of our canoe. Oliliko refers to the shimmering sparkling ocean we encounter during that time of day, as the sun sets, during our evening workouts while preparing for this race. Our name Oliliko is the kauna, the hidden meaning, for our season in life.   I feel fortunate to have been a member of this first winning crew:  From Molokaʻi: Camie Kimball, Penny Martin. From Maui: Vanessa Weiss, From  Oʻahu: Paula Crabb,  Jane McKee, Wendy Wichman, Kathy Erwin, Kim Heyer From Kauaʻi: Margie Goodno, Janet Nathanson, Cindy Albrecht , Laola Aea.

I want to thank all our supporters, family, friends, other clubs for the use of canoes, homes, trucks, cars,and helping us jump hoops, get us over bumps and make this crossing possible.  I want to to recognize Alicia Iverson of Koloa Rum for trusting in me to represent their brand and sponsoring our victory. Finally, along with Vanessa, as a co-captain I want to recognize and thank the Na Wahine O Ke Kai committee and all their supporters for all their hard work over these 41 years. Where did the time go? Thank you Na Wahine for demonstrating the spirit of imua and moving the sport forward. Thank you for making hard choices over the years, regardless if the purse was thick or thin. Good years . . . bad years . . . fast years…slow years … you never fail to put smiles on the moving sea of faces sprawled across the sands of Waikiki celebrating another successful Na Wahine o Ke  Kai crossing. It makes our ancestors proud.