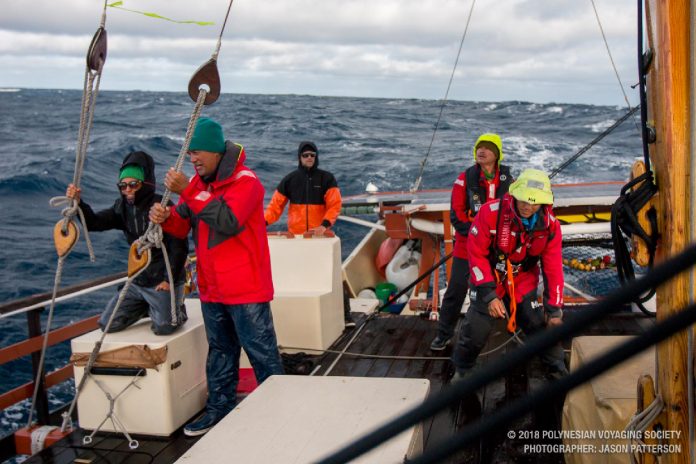 Honolulu, HI – After an approximately 2,300-nautical mile sail from San Diego to Hawaiʻi, Polynesian voyaging canoe Hikianalia and her crew are expected to arrive at the Marine Education and Training Center at Sand Island on Tuesday, December 11, depending on weather conditions. As of this morning at 10 a.m. (HST), the canoe was approximately 560 nautical miles away from Oʻahu and traveling at a speed of 3.8 knots. This fourth leg will complete the Alahula Kai o Maleka Hikianalia California Voyage, which launched in August to share the culture and history of traditional Polynesian voyaging and the important values of caring for our earth and communities.

The crew of the fourth leg is being led by co-captains Kaniela Lyman-Mersereau and Jason Patterson along with lead navigator Haunani Kane, who are part of the cohort of next generation voyaging leaders who trained during the Mālama Honua Worldwide Voyage. 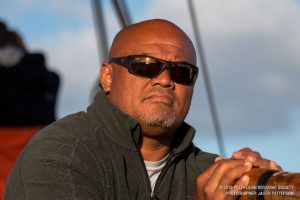 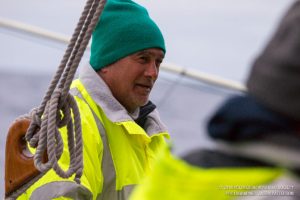 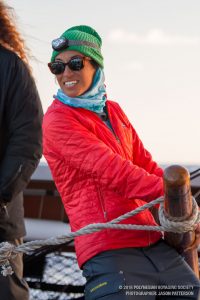 Hikianalia departed Honolulu on August 18, 2018 and made landfall at Half Moon Bay, California on Sept. 10, 2018. While in California, the canoe made stops in San Francisco, Sausalito, Monterey, Ventura County, Redondo Beach, Catalina Island and Orange County before making a final stop in San Diego. While in San Francisco, the voyagers shared a message about the importance of ocean stewardship at the Global Climate Action Summit and other events focused on environmental and cultural preservation. Each port stop began with an arrival ceremony hosted by the indigenous and local communities of the area. The crew held public presentations, school visits and dockside canoe tours to share the history and legacy of Polynesian voyaging and the mission of the Polynesian Voyaging Society.

About Hikanalia
Hikianalia, the wind- and solar-powered canoe built by the Okeanos Foundation for the Sea is the sister vessel of the famed Hōkūleʻa. Hikianalia is the Hawaiian name for the star Spica, which rises together with Hōkūleʻa (Arcturus) in Hawaiʻi. They are sister stars because they break the horizon together at the latitude of the Hawaiian islands. Launched on September 15, 2012, Hikianalia was designed specifically for the Mālama Honua Worldwide Voyage. The canoe started as an escort vessel to Hōkūleʻa and is now used as a floating classroom blending ancient wisdom with modern solutions. Hikianalia specializes in scientific exploration of marine resources and training for the next generation of voyagers. Values and behavior practiced on the deck of the canoe including how to conserve resources, care for our oceans and fellow crewmembers are shared as a model for how we can live sustainably on islands or anywhere in the world. She combines the latest ecological technology with the heritage of voyaging tradition: each of her hulls contains an electric motor powered by onboard photovoltaic panels that convert sunlight to electric propulsive energy. With a zero carbon footprint, her design supports the “Mālama Honua” (care for Island Earth) mission.