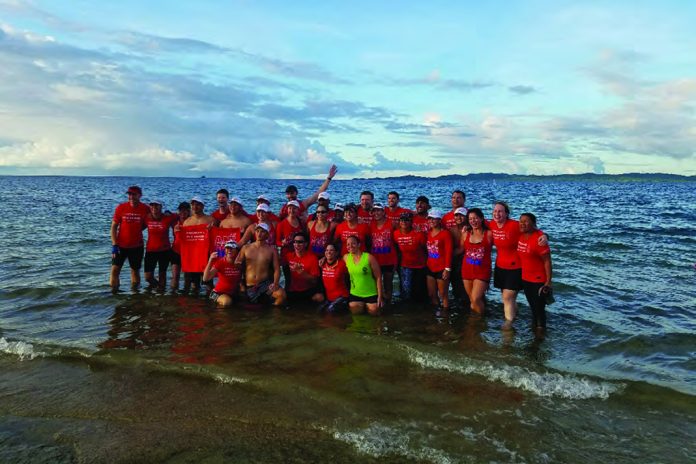 What is the Micronesia Cup (MicroCup)? I had never heard of it until three years ago when I was in Guam and showed up at Tumon Bay to jump into an outrigger canoe practice with teams that practiced daily.

As I got to know the local paddlers in Guam, they told me I should come back and paddle in the MicroCup. They explained how much they looked forward to it. The MicroCup is the premier regional outrigger championship, held each year, with the competition between paddlers from the Palau, Guam, Saipan, Hong Kong, Australia and other International paddlers.

The location of the race rotates between Guam, Saipan and Palau, usually held the third weekend in October for three days (Friday- Sunday). The race was the 18th Annual MicroCup and was held on the island of Palau, also where marine life is the best in the world with excel-lent visibility in the water. Palau is a top-rated spot for scuba divers and snorkelers around the world, so I took my mask, snorkel and fins to explore underwater around the race site.

Contacting some friends in Guam to find out more details, I found out how to become a participant. The Guam teams were full but I was able to get in contact Hong Kong United and their team captain, Rebecca, as she picked me up to be their steerswoman.

Getting to Palau you fly through Guam, with a total of flying time approximately 10 hours. On arrival in Koror, the capital of Palau you feel as if you have taken a step back in time. It is wonderfully island style as I stayed at DW Motel which is walking distance to Meyun’s Seaplane Ramp where the races were being held. I wasn’t sure of the crew or how many races I would race. I looked at the canoes on the beach at the ramp. They were older rockets that had been glassed over several times and very heavy. Their” amas” were the older style and I knew the the canoes would be slow to turn.

The MicroCup has V-1 (one man canoe) sprint races on the first day, V-6 (six-man)sprint races the second day and Long Distance races on the third day. They run 5 lanes at a time, because they have only 5 canoes with the same dimensions, so there were many heats (called Repecharges). The race course was fair with not much current or wind and the temperature was an average of 86 degrees without any tradewinds, so it’s considerably hotter than Hawaii. The only way to survive well is to stay wet and hydrate!

Marina Toribiong who represented Palau in Kayaking in the 2016 Summer Olympics in Brazil, this past summer was present for the race, as the competition was fierce with over 29 clubs prepared to compete with all the paddlers feeling enthusiastic and excited. They were definely there to race.
The race categories were either open or junior divisions, as there wasn’t enough competition to field the Master’s categories.

The events included 500 and 1500 meter sprints, including 5 and 12 mile distance races for Juniors, Women, Mixed and Men’s divisions.

The entry fee was $400 for 10 paddlers per race, which included a carbo-loading Friday dinner, with cultural dancing and the closing ceremony party, with the best seafood buffet and of course, a T-shirt.

If you wanted to, you could race in all the races and get your moneys worth. The races are very competitive, and with all the international competitors, you will make alot of new friends from all over the Pacific.

Race organizers mentioned that late Mike Tongg had been instrumental in helping them organize outrigger paddling on Palau and in Guam, but also mentioned that the MicroCup has never had a Hawaii team compete. They would love to have Hawaii teams come to compete in the future and when they do, they are sure to feel at home on a different Island.

The next MicroCup will be held in Guam in October 2017.

Hokulea Arrives in Miami, Completing Journey along US East Coast