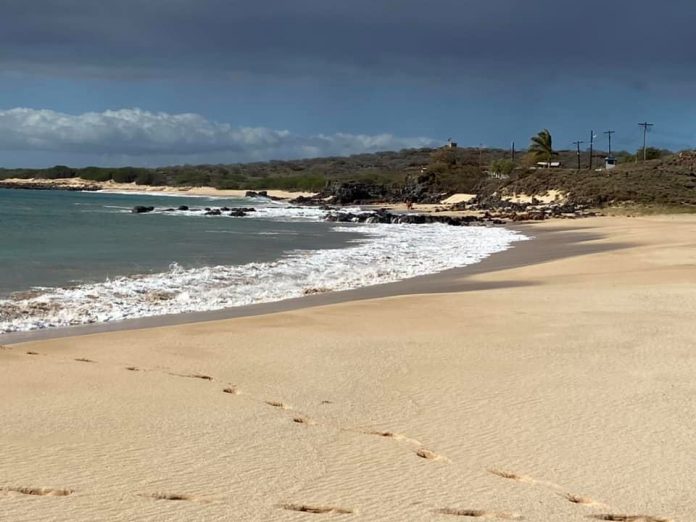 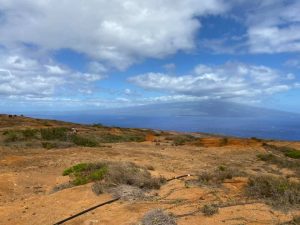 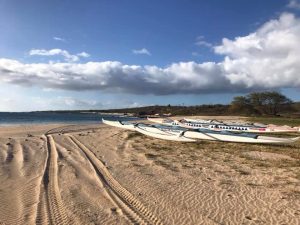 On February 15, 2020, 37 members of Hui Nalu Canoe Club launched three canoes from Kalama Beach in Kihei, Maui, on a journey to paddle to Kaho’olawe.

We named our experience Hoʻala Kanaloa. Hoʻala means to restore, reawaken, excite, arise or revive. Kanaloa is the name of one of the four major akua of Hawaiʻi and is the secondary name for Kaho‘olawe. It is associated with the ocean, the sea, long-distance voyaging, and healing. Hoʻala Kanaloa is the restoring and reviving of the island, Kaho‘olawe. Hoʻala Kanaloa also refers to the connection, commitment and kuleana we have as paddlers to restore, revive and mālama our sea.

This journey fits within Hui Nalu Canoe Club’s mission to “provide educational activities for individuals, families and the community revolving around ocean activities.” Hui Nalu means the “Club of the Waves”. Our club’s mission along with our love for paddling made the act of paddling to the island an important part of our journey. 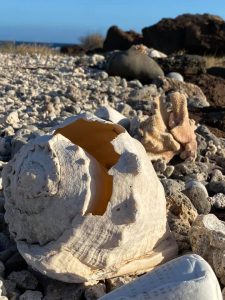 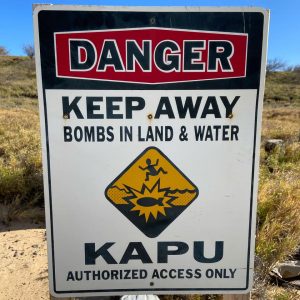 Our purpose on the island was to volunteer for the Kahoʻolawe Island Reserve Commission (KIRC) and reintroduce native plant species to the island. The KIRC is a division within the State of Hawaiʻi Department of Land and Natural Resources (DLNR), created to manage the Kahoʻolawe Island Reserve while being held in trust for a future Native Hawaiian sovereign entity. The KIRC uses federal funds designated to State responsibilities for their restoration effort. Along with restoring native wildlife, the KIRC works to preserve the island’s cultural heritage and monitor the pristine waters surrounding the island.

Archeological evidence suggests that Hawaiians came to Kaho‘olawe as early as 400 A.D., settling in small fishing villages along the island’s coast. To date, nearly 3,000 archeological and historical sites and features—inventoried through 2004—paint a picture of Kaho‘olawe as a navigational center for voyaging and the site of an adze quarry, an agricultural center, and religious and cultural ceremonies. Traditionally, the island has been revered as a wahi pana (legendary place) and a pu‘uhonua (safe place). 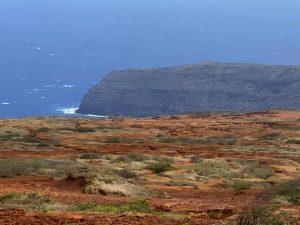 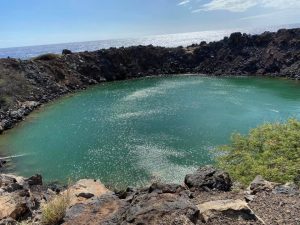 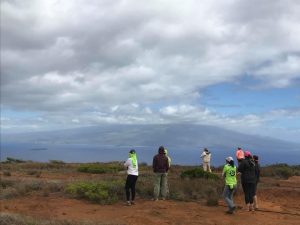 Beach landing; The view looking at Maui from the highest peak on Kahoʻolawe

As modern times rolled in, Kaho‘olawe underwent a harsh evolution. It was used briefly as a penal colony, for sheep and cattle ranching, and eventually transferred to the U.S. Navy for use as a bombing range. Litigation forced an end to the bombing in 1990 and the island was placed under the administration of the KIRC. Following 10-years of ordinance removal, control of access to Kaho‘olawe was transferred to the State of Hawai‘i in 2003. Today, the KIRC is responsible for the restoration and sustainable management of the island until it can be transferred to a Native Hawaiian entity. (1)

Kahoʻolawe is being planted with native species that include trees, shrubs, vines, grasses, and herbs. As of now, more than 400,000 native plants have been reintroduced. However, only around 820 acres of the 12,800 severely eroded acres of land can be replanted; the remaining land is severely compacted, barren hardpan-soil that can no longer readily absorb water. 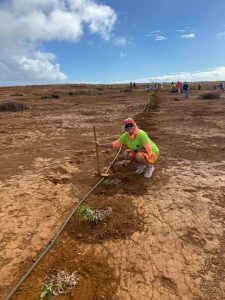 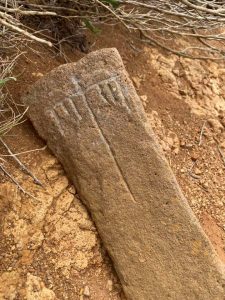 Cultural integration is emphasized in all facets of Kahoʻolawe’s restoration. Traditionally, the island was considered a sacred place closely associated with Kanaloa. Today, it is still considered a sacred and spiritual place as well as a cultural treasure with numerous heiau, koʻa, and ahu on the island. The entire island is listed on the National Register of Historic Places because of its archeological, cultural, and historic significance. (2)

The wind forecast that day was high wind (24-30k) conditions. We launched our canoes from Kalama Beach in Kihei, Maui. Each canoe had two crews of six and an escort boat. The plan was to paddle to Molokini crater and down the north side of the island to the KIRC camp around the northwest corner, approximately 24 miles. Initially, the weather was calm, with beautiful, glassy ocean conditions. About a mile past Molokini crater the winds kicked in from the Alenuihaha channel, abruptly changing the weather to small craft warning conditions. Big swells and high wind on the ama created a challenging journey to the island. However, upon turning down the north side of Kaho‘olawe, it became holoholo surfing all the way. We conducted water changes along the way that afforded spectacular views of the island from the escorts. Finally, we turned the last corner and paddled upwind at thirty knots for two miles before reaching the base camp beach at Honokanai‘a.

In line with traditional Native Hawaiian protocol, all individuals who desired access to Kaho‘olawe were required to ask permission through chanting an Oli Kāhea, an entrance chant. Once everyone reached the beach safely, the group chanted the Oli Kāhea, definitely a chicken-skin moment.

With the gear offloaded and canoes secured we traveled to the basecamp facility. Sleeping arrangements were barracks-style with bunk beds and outdoor showers. We received an orientation on what to expect for the following day’s work. The orientation covered Kaho‘olawe history, UXO safety, access rules, what to bring, and Kaho‘olawe protocol. The camp had a copious kitchen with a full-time cook and top-notch meals. Breakfast was at 6 AM and dinner was at 6 PM, and everyone in camp knew not to be late.

Sunday morning, we set out at dawn in trucks and four-wheel ATVs to the top of the island to start planting. It was a 45-minute drive passing beautiful views of the island and the ocean. The cold and rainy morning brought endless beating winds. Everyone bundled up like Eskimos. The conditions on Kaho‘olawe were arid and extreme. With little vegetation, the sand whipped you like a sandblaster, red dust was everywhere, and dehydration was of great concern. 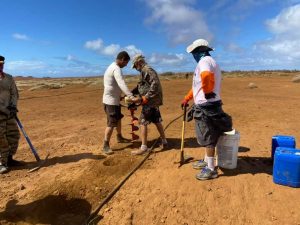 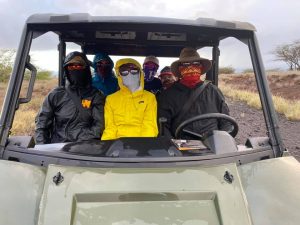 Due to years of abuse from overgrazing and bombing, the fertile topsoil of the island was gone. It is estimated the island has lost about 12 feet in elevation due to the bombing and erosion. The only thing left was a hardpan, with the consistency and porosity of concrete.

We used gas-powered augers to drill 6-inch diameter holes to get to the softer soil below. Working in teams, we added soil amendment to the hole, mixing it with water to create a moist bed for the small native plants. Each plant came in an individual container shaped like a deep cone. After being removed from their vials, three plants were planted per hole, covered with soil, and finally mulch. One last watering and then we installed drip irrigation at each planting. By the end of the day, we planted over 2,000 plants. Many of them won’t survive the harsh conditions but the ones that do will add a catchment to preserve soil and hopefully generate seeds to replenish the native flora.

After finishing our work project, we learned about the historical and cultural significance of different areas. We traversed to the island’s summit at 1,400 feet where there was a spectacular view of Maui, Lana‘i, Molokai and even the Big Island in the distance. The Alenuihaha was visible with huge wind-whipped rollers coming down the channel, a one-man paddler’s dream.

At the summit, there was a modern-day ahu (altar) used by cultural practitioners and voyaging groups. There, we offered awa, olena, and wai from our Kuliouou, Kanewai, along with Kalauha‘iha‘i as Ho‘okupu (offering) to Kanaloa. Many other offerings could be seen from previous activities.

On our trek back to the campsite, we stopped at a more sobering sight. The Sailor’s Hat, a crater of three blasts of 500 tons of TNT each that the navy used to simulate a nuclear bomb blast and to study the effects a nuclear blast would have on ships that had been anchored offshore at three separate distances. Seawater infiltrated the fissured rock to create a large, desolate pond.

We spent the rest of the afternoon at basecamp. A lot of people jumped in the ocean to experience the pristine beach bordering the campsite. It was a great time to relax and reflect on what we’ve done so far. Some of us tried to remove the dirt that stuck to everyone after our morning of work.

Again, in line with traditional Native Hawaiian protocol, when departing Kaho‘olawe we established protocol calls for the chanting of an Oli Ho‘oku‘u, or a request for release. Both the Oli Kāhea and the Oli Ho‘oku‘u are specific to Kaho‘olawe and are used when entering and leaving the island. 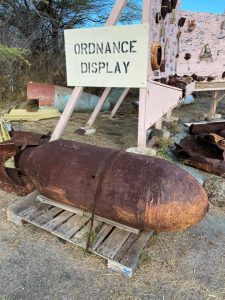 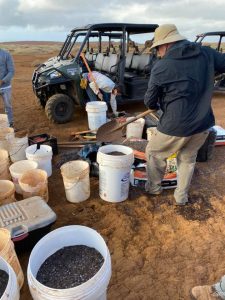 Our last day arrived and we decided that, in light of the rough conditions coming down on Saturday, we would tow the three canoes. We decided to tow the canoes as far as we could while it was fairly calm and through the winds that made it too dangerous to paddle. Once we got to a place safe enough for everyone to paddle, we would paddle the rest of the way. The majority of the trip home was upwind, and everyone felt that towing was the safest choice. We left at dawn and started our journey home with the blowing of the Pū and a beautiful sunrise at our backs. Towing the canoes turned out to be the right decision because we came across a headwind for the first 6-8 miles and large, aggressive ocean swells in the Alalakeiki Channel.  Once we got past Molokini Crater, the winds grew light and the ocean settled, so we paddled from there to Kalama Beach well before noon. That let us wash down the canoes and enjoy the town until our inevitable flight home.

If you ever get a chance to do this trip it will leave you in awe of the beauty that surrounds the island. Despite the abuse it has sustained, Kaho‘olawe has escaped the development her sister islands have endured, so it is still truly pure in that respect. The island is wild, free from any modern restraints. There is an energy here, you can feel the mana, and it will change you forever.