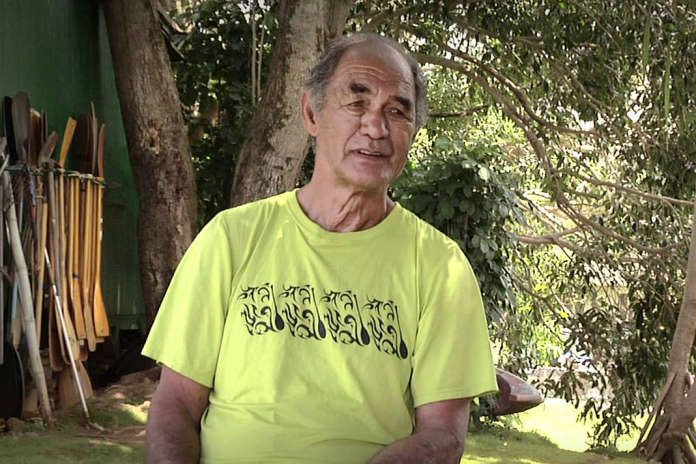 I recently watched a wonderful video of Nappy Napoleon’s 50th Molokai Ho’ e crossing …. it inspired me to share one of my great experiences with the Ultimate Waterman.

I happened to hook up with one of Nappy’s long distance crews in the late 80’s, way back when the Chico Ho race was still an annual event.. he called asking me to participate in a 2 day sailing canoe race which started at Shriner’s beach in Waimanalo … and ended up in Haleiwa, at the Haleiwa Beach Park. I’ve never participated in a sailing canoe race but with the mindset of a longtime paddler…something being called a canoe race was enough for me to simply ask where and when. I still remember going to his house early in the morning to begin the roundup of items we needed to get our canoe rigged up for sail-ing .. he didn’t say much while we gathered the items … rope netting to serve as our sailing canoe trampoline, huge wooden blocks to hold up the main sail…a simple triangular canvas that served as sail… a modest but surprisingly functional foot pump contraption, that would help bail out water from the canoe … of course an ordinary malia racing canoe and all the other paddling equipment that goes along with a normal paddling session.

When we finally got to Shriner’s … I watched in awe as the other sailing canoes that were being rigged seemed to have all the newest equipment … the aluminum shafts for the main sail, the nylon nettings for their trampolines .. the newest sailing canoes were certainly on display that morning. When the race finally got underway … I noticed that some of the more novice crews were following our canoe out … most of the paddlers there knew Nappy … and they knew that Nappy would always find the “best” course to take for any kind of canoe race. We paddled out into the ocean for about 15 to 20 minutes … simply listening to Nappy bark out commands as he steered us out into the some-what choppy surf .. his next command was “Okay … keep paddling .. but.. Hold on! …. and he turned the canoe north … I could hear the sail unfurl and begin filling … I could feel the canoe shift into another gear … I kept paddling .. but with the wind behind us … my paddle knifed through the water without any effort .. I finally “held on” .. just like Nappy said to do. It was a feeling of exhilaration .. a Blast .. a brand new experience … flying along at about 15 to 18 knots .. our converted racing malia was now being pounded as we flew over wave after wave … our man assigned to the trampoline was now wide-eyed and you could see his white knuckles hanging onto the makeshift ropes we wove together to serve as our trampoline .. literally hanging on for dear life .. as each wave we flew over had him bouncing high into the air as we hit each wave. Each wave we hit also had our canoe groaning uneasily and scarily … creaking louder and louder as we hit top speed .. I looked back at Nappy … and all I could remember was this big grin on his face … his pearly white teeth gleaming in the salt spray …. he looked at me and gave me a thumbs up. 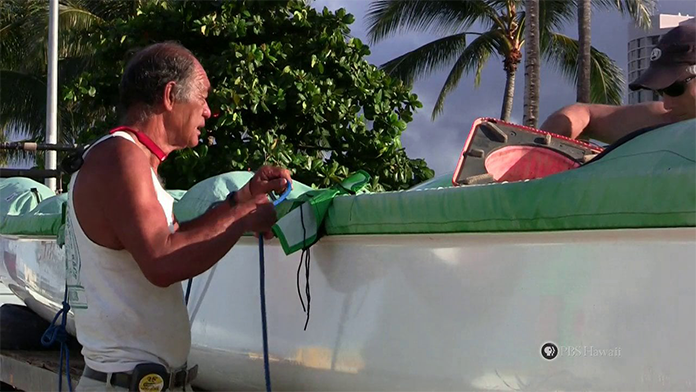 That was all I needed to know that with Nappy steering us … we were safe. The make shift water pump that was attached to seat 4 in the canoe, held up well and functioned as well as the high tech pumps engineered by the newer boats. Soon after entering calmer waters after leaving the Kailua Beach shorelines … Nappy gave us a caution. “If any of us fall out of the canoe for any reason … dive straight down!! … after he said that ..we paddled in silence .. but finally .. one of us had the nerve to ask why “straight down”? … to which Nappy replied .. “because … we dragging lines … fishing lines .. with big hooks on the end … and if you don’t go straight down .. one of those hooks will get you!!” …. ever the resourceful Hawaiian .. while we raced .. he had hopes of catching dinner! ! For the most part it was great fun … but later we became acquainted with a sailing vessel’s most feared conditions … the doldrums … waters that had very few winds .. we paddled continuously for what seemingly felt like an hour or two .. before we hit good winds again .. the sail filled out and we began sailing again .. we got to the area around Turtle Bay .. when the choppy surf began to increase . . was about this time, that one of our crew members wanted to get the experience of handling the sail. Nappy as always .. was never one to deny a paddler from wanting to experience learning new ocean experiences …. agreed .. and had the crew member handle the sail. We were flying along in the surf … but the wind changed direction suddenly … the inexperienced sail handler somehow shifted the sail in the wrong direction .. and our canoe went over. In the chaos that followed .. again it was Nappy barking out commands … “number 2, get all the paddles and hang on to them” .. we all hung on to the hull of the canoe or on the ama, while Nappy went around the canoe handing out differ-ent parts of ropes that held our main sail .. he then went under water to assess the situation.

He finally came up holding what seemed to be a tool chest .. he motioned me to hold on to the chest while he went through it to get tools he need to unhitch the main sail from the overturned canoe. As he sifted through the tool set to get the right tools, he explained that the mast is about 30 feet long and if we don’t remove the mast we would never be able to right the canoe again. There was some concern that there was some distance between other canoes that were in the race … none were near the area that we had capsized … there were no escort boats in sight. … And as always, Nappy was never one to wait for help .. he just kept going under water to work on the removal of the mast. While he kept working, I began to get severe stings from what I thought were Portuguese Man-o-war jellyfish. I wasn’t certain what they were as I couldn’t see any of them around me .. but I knew I was being stung repeatedly. Finally, after about 30 minutes .. I felt my jaw go numb and a strange tingling sensation surrounded my arms and legs.

Just about then Nappy resurfaced to get another tool … I tried to hand the tool chest but as I tried to open … the numb-ness had also taken a toll on my arms .. the tool chest dropped from my hands as Nappy swam towards me. I frantically tried to dive down to retrieve it .. I could see the tool chest falling deeper and deeper into the waters .. and I simply just ran out of breath trying to reach it. I surfaced and looked at Nappy .. “I’m sorry Nap .. I couldn’t reach the tools” … He looked at me and said … “Ehh let’um go Doug, no worry .. we always take from the ocean … it’s about time the ocean take from us” .. that statement was one that I will never forget .. what a profound thing to say .. in the middle of the ocean, in the middle of a dilemma that I felt catastrophic. 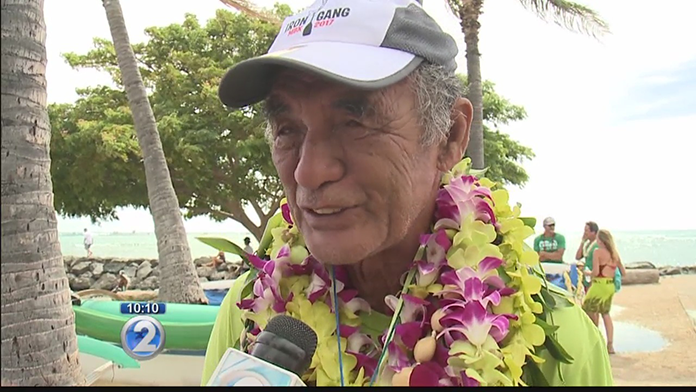 Deadpan common sense with a philosophical twist .. it could only have come from a humble man who had the humblest of beginnings, a man who valued the very simplest of God’s gifts, life, family, friends and the Ocean and what it offers to sustain us. I tried to explain that my jaw and body was going numb from the Portugese man-o-war stings. He explained that he had already removed the mast from the canoe .. and that we could right the canoe in the water .. he then barked out commands to each crew member and soon we had the canoe righted .. our stroker got into the canoe and began bailing the water out of the canoe. As soon as he felt the canoe was upright enough ….He retrieved a paddle from our number 2 crew member, handed it to me .. and ordered me into the number 1 seat .. “just get into the boat and paddle while we work to get the sail up again”. I did as he had instructed me to .. I climbed onto the canoe .. got into the stroker’s seat and began paddling .. although at the time, it seemed an exercise in futility .. as I was the only one paddling while everyone worked around me .. but Nappy assured me that the paddling would help take the numbness out of my system.

Everyone else was frantically working around the Canoe .. Nappy finally handed a rope to each of the others around the boat .. and gave the command to start pulling the mast up. It took several attempts .. but finally I could see the mast slowly rise out of the waters and stand upright. Nappy and other crew members quickly got into the canoe and began pounding the wooded blocks in place to hold the main sail shaft in place. As I continued to watch the organize chaos around me .. I began to realize just as Nappy had said … as I paddled continuously, by myself … the numbness began to slowly leave my body. By the time the sail was attached to the sail shaft .. I was back to normal … I kept calling Nappy “The Man”… thanking him for helping me through that scary time .. I thought the numbness overwhelming my body was a prelude to something even more serious than I could have imagined.

The canoe upright, sail attached .. the water out of the canoe … Nappy ordered everyone back into the canoe .. I climbed into my Number 3 seat .. and we all began the paddling again .. to our final leg … onto Haleiwa. After a few minutes of paddling . .like a breath of fresh air … the wind picked up again … the sail filled … and we were flying again. When we finally reached Haleiwa … there were family and friends to greet us .. the entire fleet of sailing canoes were already in … many of the sailors came over and asked what had happened to us. Nappy being his ever so humble self .. downplayed any of the drama … saying that we simply went over by Turtle Bay. I felt a great pride to have been a part of one of Nappy’s many crewmates .. this was an adventure that I will treasure for the rest of my life. From this adventure .. I have learned why Nappy is most revered by all of who claim to have some experience as paddlers and water-men.

Nappy Napoleon is a living treasure .. along with Ultimate Waterman .. he will no doubt be given many more accolades in the future. Nappy will always be legendary and all who has had the pleasure of paddling with him will walk away with other cherished stories of their experiences with him. He will always be Treasure and a · and the recreation it offers. all who enjoy Hawaiian waters and the recreation it offers. 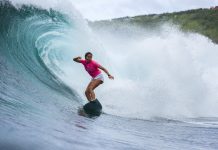 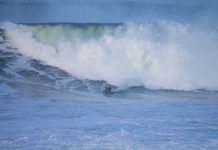